This is probably supposed to be spelled Zipnite because -ite is used to form nouns denoting rocks or minerals. 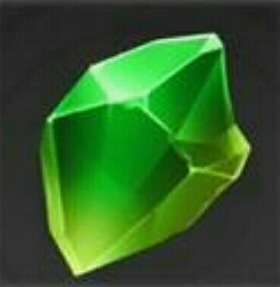 In Denma with NAVER WEBTOON, it's appears in the form of the green gem, which is necessary for strengthening. But it doesn't reveal what shape it looks like in Denma.

In A Catnap (60), a man and his man who's dressed in like Dike's uniform goes to the Duke. The Duke says he doesn't make a deal with a guy who covers his face. The man takes off his mask and says he just didn't want to make the Duke to uncomfortable. The Duke says he likes that considerate attitude. The man says he has Joshua's eyes for the Duke. At this time, White Police Guards show up, and the Duke says Joshua's eye isn't something to be carried around like that. His man substitutes Joshua's an eye by matches the mass with some metals on the left wrist's wristlet. The man says he has the other Joshua's an eye and he'd like the exclusive right for this trade for Northern Capital Country. The Duke asks the man's name. The man answers he's the Count of planet Urano, El Rinyo Areukedillama Nubeure Sosyekiaseu, people call him El.

The Duke breaks Joshua's an eye and tries to put El and his man in underground prison. As El is being held, he says he recently heard that the pseudo religion is taking over one of the military supply companies so Joshua's eye should make the Duke the shareholder of the company and that will make him the actual owner of the eight universe. When El and his man are gone, the Duke says Mayhen that if people want to make a deal with him they should be as prepared as he's so he likes him, and he orders she'll go do some research on him because when Joshua's eye shattered he didn't look shaken up that means he doesn't really know the value of what he brought so he thinks there's a guy around him that's pretty good. In the meantime, Mayhen restores Joshua's eye to her Quanx ability. El says his man that he's sorry and Hazz told him that the Duke will make a deal with him as soon as he sees it so he just did what him told him to do.

The Duke arrives the underground prison and asks why didn't El tell him he was the Little Emperor. El says he wouldn't dare say that in front of the Duke. The Duke offers to drink with El. El says he heard from people about the Duke offering drinks and it would be a great honor for him. The Duke makes up for his rudeness so he gives Federick to El, who's one of his White Police Guards. The Duke says Federick will be loyal to El except for the times that he call in the White Police Guards, and he asks he can show the Little Emperor's branding. El brands the symbol to Federick and he says this like a tattoo but a little different and if the people have this symbol branded he can transfer his emotions and health conditions to them.

The Duke hugs El and says he'll tell him the results of the deal with the See before anyone else, and even if he get what he want he can't accept his favor and it's practically impossible because the relationships are more complicated than he thinks and most importantly, it's crazy to even think about monopolizing because he can't try to take it all by himself because they'll blow him up. And the Duke says El didn't really mean to monopolize it because that was just a part of negotiation. The Duke promises that no one's going to call El the Little Emperor from now on and it'll be more difficult to handle everything around him so he want him to bear with all of them because he can't officially help him, but he won't take back his attention from him, it means he'll called the Emperor of planet Urano.

The Hyponne family thinks the family is always first and they're just putting a little pressure by sending one of their battleships to planet Bella. Then if the worst happens, the Hyponne family will stop trading this with the planet Bella once and for all will be a more efficient way to avenge than a war. But Duke Gosan says if a war breaks out between Bella and Terra will make a ton of money off of it.

Outside the window, Bella uses light to display the word WE ♡ MAY. The eldest son says to the other brothers that they reopen this trade with Bella and get ready for the wedding.

In Chapter 2 2. A.E. (15), the Director of Pax Industries says El brought the Duke the halidom of Madonna. Dr. Kitten says this wasn't even fully analyzed yet, so El have a vision. The Director of Pax Industries says even after the Duke turned El down, he was persistent on getting that sole right, and after few years, he finally got the consent, and at the time, the only margin one could get out of this was want the people had get from simple barter, and if they think about it now, they handed over the exclusive rights to him for nothing. The Director of Pax Industries says a genius scientist of Urano, Dr. Ha'ken discovered Numen, also known as the god's skin, from this, and he passed away shortly after El got his sole right, and the cause of death is still unknown, and the anti-gravity weapon which only existed in theories could be manufactured all because of this extraordinary material, and Sten Industries, who applied this technology for the first time, became the top weapons manufacturer in the universe eight, and soon, this Numen technology was applied in all industries, but the El family intentionally supplied cheap this to Sten Industries, once the top of the industries, to constantly undermine the company's value, and at the same time, they kept buying off reliable subcontractors, and this was possible because of their exclusive right to these, so they became strong enough to surpass Gosans anytime now.

Retrieved from "https://denma.fandom.com/wiki/Zipnight?oldid=11981"
Community content is available under CC-BY-SA unless otherwise noted.