Yoon (윤, Yun) is a character in Denma.

His forehead was written for 卍. As the original symbol resembles a swastika, the symbol of Nazi Germany, it was changed to an "X" in the English version. This happens again. 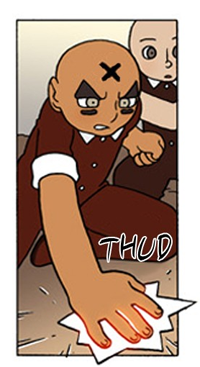 In A Catnap (147) - Ch.469, on some planet, on the school ground, he Planar Constrains a toad because he'll give to his crush. One kid teases that he likes her.

He appears and gives Eugene a toad that has been transformed into 2 dimension, and he says if he liked her, he wouldn't give her something like this every single time. Eugene thinks what's going to pop out this time and sees this.

In 12. A.E. (5), Edel and his brother priest Yoon are trainning at Lang monastery on planet Tulou. One trainee announces that the marine Quanx brigade came into the village to fight trainees again and they said they will put up their battleship for the fight. Edel says to him that himself will fight.

He and Edel are suppress the marine Quanx brigade. Edel asks if he can have the battleship they rode in. He answers it's going to belong to monastery, and asks this have something to do with the girl on his chest. He says that he'll make sure that Father Superior doesn't find out. Edel reveals that he's collecting everything on Nell's wish-list until she wakes up. People get mad if he steals for them, but they get more mad if he refuses to steal for them. Edel asks if his story seems to have something to do with the entire village he carry around in his pocket.

In (7), a year later, on Madonna's birthday festival, the marketing team, soon to be Black Chapter agents, included him and Edel to work standing guard for Z-Dragon. Edel says to him that Z-Dragon is an amazing artist. He tells Edel is seems to going to kidnap this Z-Dragon to fulfill Nell's wish list. One guy hears these conversations secretly and reports to someone that the bodyguards from the church are scheming to kidnap Z-Dragon.

The other guy reports to Mr. Manager that one guy said he overheard a restroom conversation between a bald man and a silver-haired man in black priest robes, and the bald one asked the silver-hair if one guy was going to kidnap Z-Dragon. The show is over, team white says to Z-Dragon that code yellow, because there's someone after him, so he goes to the control center. Edel also goes to Z-Dragon.

In Savoy Gaal (12) - Ch.60, Edel says Denma that he once knew a Quanx who had a whole village in his constraint plane.

Retrieved from "https://denma.fandom.com/wiki/Yoon?oldid=14390"
Community content is available under CC-BY-SA unless otherwise noted.