Urano (우라노, Urano) is a planet in Denma.

Hazz is butler of the El family.

Denma recalls that the Pentagon kidnapped and sold off Guyrin to El after they failed to capture Dike where here. Guyrin is El's slave.

This place looks similar to Santorini.

The Duke breaks Joshua's an eye and tries to put El and his man in underground prison. When El and his man are gone, the Duke says to Mayhen that if people want to make a deal with him they should be as prepared as he's so he likes El, and he orders she'll go do some research on him because when Joshua's eye shattered he didn't look shaken up that means he doesn't really know the value of what he brought so he thinks there's a guy around him that's pretty good. In the meantime, Mayhen restores Joshua's eye to her Quanx ability. El says his man that he's sorry and Hazz told him that he'll make a deal with him as soon as he sees it so he just did what him told him to do. He thanks to his man and if they make it out of underground prison he promise that he'll take care of his entire family and he asks his son's name. His man answers that his son's name is Dike Heubing.

El's nickname is the Little Emperor of here. El have the ability to brand the symbol to transfer his emotions and health conditions to the other. The shape of the symbol is a circle of bold line and it seems that it's settled as a symbol of the El family. The characters of branded symbols are Federick, Denma (Dike Heubing), Guyrin, and Randolph (Eunguy). Guyrin is branded the symbols on the shoulders, while the rest are branded them on their palms.

The Duke says he'll tell El the results of the deal with the See before anyone else, and even if he get what he want he can't accept his favor and it's practically impossible because the relationships are more complicated than he thinks and most importantly, it's crazy to even think about monopolizing because he can't try to take it all by himself because they'll blow him up. And the Duke says El didn't really mean to monopolize it because that was just a part of negotiation. The Duke promises that no one's going to call El the Little Emperor from now on and it'll be more difficult to handle everything around him so he want him to bear with all of them because he can't officially help him, but he won't take back his attention from him, it means he'll called the Emperor of here. El and his people are disappear.

In 1. A.E. (2) - Ch.495, El says to Hazz that Federick's paycheck is 100 times the usual rate so this is outrageous. Hazz says with the price, El now have connection with the Duke himself. El asks what he did get from following Hazz's advice, and first he gave up the halidom, and now he has to pay that Federick two more digits. At this time, a hologram with white 100 on the orange background is appears in front of Federick's face. Federick says to El that the Duke summoned him so he'll be back soon, and it seems he's on planet Aorica, and he teleports. El grabs Hazz by the collar and says Federick goes away whenever the Duke wants him so it's not security because he doesn't feel safe at all. Hazz says they've been through this already, and their goal is to build a relationship with the Duke.

Hazz angry so he uses reverse arm-bar to El, and says he's lucky he's his master, otherwise, he'd has broken his arm. Haaken meets his comrades, and he finds Guyrin and Rosa. A comrade says he's sorry and it looks like someone slipped the plan that day to El. Haaken accuses himself because he leaving Guyrin to Rosa like that, and he totally forgot about them all this time while he was locked up after the church set him up, and he even thought about running away to another universe. Haaken asks where's the rest of the crew. A comrade says he doesn't know since when, but they went out of reach one by one, and his guess is they either got tired from all the fighting and ran away, or got killed by El's new goon. Haaken asks where's Kaiser. A comrade answers Kaiser works for El now. El's man buys egg buns. In the El's man's home, his son, Dike eats an egg bun. El's man asks his wife that her feeling and she did take the pill. El's man's wife answers she's much better now. At this time, El's man have a call, and says the Count seeks his presence. El's man calls Dike that he can take care of his mom, and he'll be right back. El's man's wife calls him to Kaiser, and says be careful out there.

Haaken meets Kaiser. However, he doesn't get angry any more, but rather they eats alaska pollocks' dried young, and drink a can of beer. Kaiser asks Haaken did escape from prison, and he answers yes, and he asks how's his wife doing. Kaiser answers his wife is getting better ever since he came out of the Wolves' Den. Haaken thinks something, and he says he must've been sick of there himself, and after he broke out from prison, the first thing he could think of was running away to another universe, and he never cared about Guyrin before but all those things she'll go through as she grows up kept bugging him so he came back to kill her so she can die without any pain because it's better kill her rather than letting those noble pricks take advantage of her. Kaiser says he thinks, Haaken thinks that makes him more of a wolf, and he must've hurt his head back in the cell, and he asks he shouldn't asking why he went to El first. Haaken answers because Kaiser was hungry and it's what lap dogs who pretend to be wolves always do. Kaiser says he likes living as a dog, because he doesn't need to act so smart to get paid, his wife and Dike are happy. Haaken says soon he'll get what's coming for him for his betrayal. Kaiser says that's okay, because if he die as El's dog, his family will get a job, and they got a new Hyper-Quanx who can do Interplanetary Teleportation, so he heard there will be a major bust on the Wolves' Den this month, and if he survived until then and get dispatched himself, he should take care of him first, 'cause he can't let beautiful Guyrin die in the hands of some wolf talking gibberish in despair. They both cheers, and drink beer. 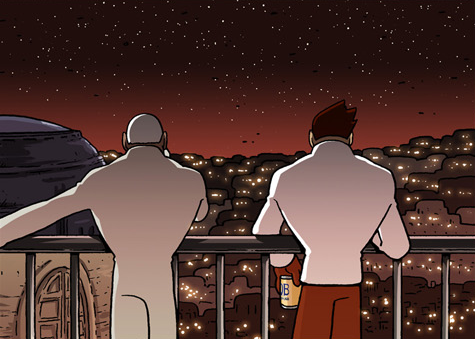 Haaken says he didn't know the night view was this beautiful from here.

In Chapter 2 2. A.E. (1), El orders to his servant that he'll choose these girls tonight. At this time, Hazz appears and reports that their request for more guards has been approved and they were the only one accepted, and it means the Duke has finally recognized El. El says he want to like any other nobles so he keep some distance from the Duke and he want live a quiet happy life, because he did to Aorica so he scares him. El says let's just call the whole thing off and tell the Duke something just came up and cancel the reinforcement request. 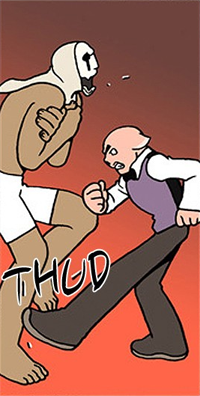 Hazz kicks El's shin. Hazz angry and shouts that, it hurts when he think about how worthless El is, because after all they've done for this very moment, and now he got cold feet. Hazz says they've been through just to get the halidom. El calls Hazz to damn pig, and he asks what does he want from him. Hazz answers he want El become the king of the universe eight.

Dike was the number one target for bounty hunters on here. 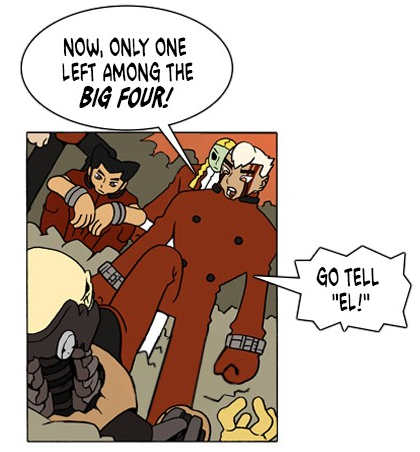 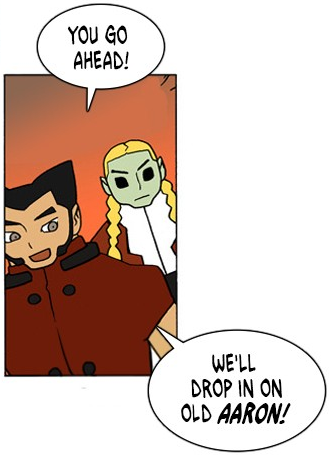 In Blackout (4), There was a war with Big Four who're El's soldiers, and Dike's colleagues, including the Jet here.

In Savoy Gaal, In the Pentagon, including Gaal, they're tried to hunt Dike down. Pentagon kidnapped and sold off Guyrin to El after they failed to capture Dike here. But Pentagon was already disbanded before Savoy Gaal.

Gaal explains that he and Azio's group are currently in the hyper-acceleration chamber for a hyper-speed train is reminds him of that one time, when he was on here. In the past this planet, something was created a sudden dropped in air pressure and sucked everything nearby. After that, Azio's group is sucked in a a hyper-speed train.

Denma says Manoah's Table is Gaal must've been there at least once if he were on here and Hannah is quite the cook. So even Chef Manoah would take her in as an apprentice.

Denma sees Pentagon's information received from Gaal. And Denma knows that, Guyrin isn't kidnapped but she has led herself deeds to El. Guyrin says she doesn't trust Dike and she needs El's protection. Denma is shocked by the fact that Guyrin betrayed himself.

Jet says Randolph need Dike more than he does, and he can live without that pocket change, and he has lost more while gambling, but he's El's slave. At this time, Eunguy breaks Jet's arm, and says that money is important but he has gambled it, so he'll get him that money from El. Eunguy plans that, he'll help Jet find Dike intact then they can both go to El together, and he get to get rid of his mark, and he get to bring his money back. 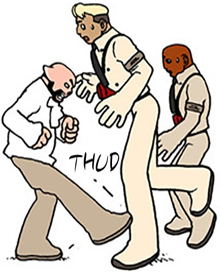 The Battalion commander had be a dead man if it weren't for Hador on here, and for what it's worth, he wish him all the best. So Master Sergeant Hador could recover his body while he was the Carlburn's Quanx Squad, and the Battalion commander can cover for Hador's ass only so much, so he's way above his head in the count of years in there.

In Kuan's Fridge (38), Sumai thinks this is bad if he can't make the payment in time. Sumai calls to Marvin that please send in good words for him to Master Hazz, and due to unforeseeable circumstances, the payment is going to be delayed a little. At this time, Marvin makes a strange look. Sumai says Marvin don't give him that look, and he knows more than anyone how diligent he's, and he has to help him convince Master Hazz. Marvin says he guesses he could fill in the loan temporarily, but Sumai make it fast, and he knows what Master Hazz is like, and he gotta go now. 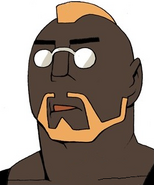 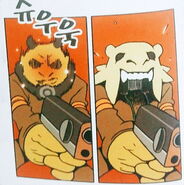 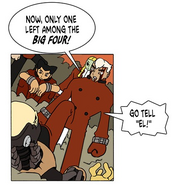 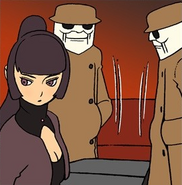 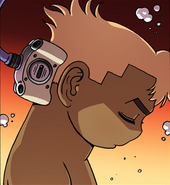 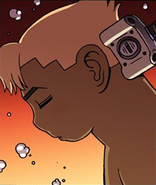 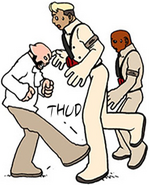 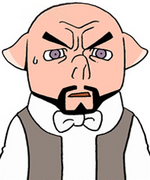 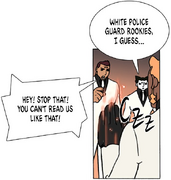 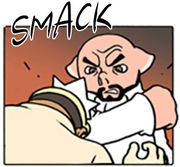 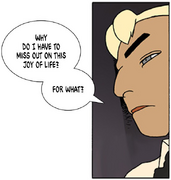 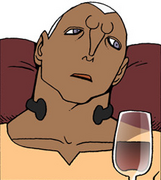 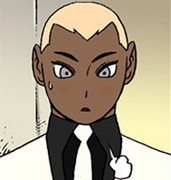 Kuan's Fridge (225) - Ch.756
Add a photo to this gallery
Retrieved from "https://denma.fandom.com/wiki/Urano?oldid=13992"
Community content is available under CC-BY-SA unless otherwise noted.