In (38), since Balack is a class two Quanx so a member of the supporting team for Security Department, Brown hair holds him with his binding ability. A Security Department member says Mole face got lynched after having both his arms and legs torn up right in front of them and that was Balack, and what would happen if they contain their anger and let Holy See take care of it. 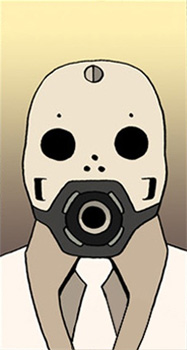 He says Max isn't here with the Security Department so they can just say that there was a lack of leadership and they have a good excuse at least, and Balack did this to Mole face and if don't do anything, that'll cause more problems so if he use his skill first, he'll start bleeding so first they'll beat him. At this time, Balack is wakes up. When the Security Department guys beat to Balack, he's look on with folded arms. The supporting team for the Internal Affairs come to rescue Balack.

Balack is released from the Binding by an attack from Black hair who's beats to Brown hair in a fight between the Internal Affairs and the Security Department. He cuts Balack's arm with his ability.

Balack has first-aid treatment by Planar Constraint and he says the guy who broke his arm he tore his limbs so he's thinking what more he should does to the guy who tore his arm. At the same time, Balack constrains him into a plain, and he says save his screaming for later he'll let him do that later.

Balack hands Abigail a person and his limbs which were confined into planes. Gatsu orders to Purple hair that he take the Yellow hair to the locker in the transport now, and he says to Balack that they've the witness from the Security Department and those priests will be back with real guns next time, and before things get any more complicated so they'll get Hades and head back.

Max sees him and asks to Abigail that this is the only guy that he got from the Internal Affairs, and he thinks he has a feeling that the Security Department was a step behind.

The doctor says to Black hair that as long as the controller inside Hades' head is on, he'll be unconscious, and he found something, which is banned from the Holy See since the Revolution of Gram. The doctor explains the left one is the prisoner identification chip from the Internal Affairs Department and this thing on the right is a rooted signal generator and they're often used as a tracing device so in order to prevent it from being removed it firmly roots down into human organs once implanted so if they want to take this out, they'll need to dig up Hades' brain, and if the guy who did this is from the Church of Madonna, he'll be banned regardless of the reasons.

He wakes up at the medical center from the Security Department. The doctor says when he was first transported here his limbs were torn off with the Plane Confinement, just like another guy who came in. He thinks he's Balack and he goes to the restroom, but doctor is embarrassed. He finds out that Balack has taken away his Little Pleasure. He screams.

The doctor says if Mole face lose a part of the body, but he can recover this. According to this, he can use body restoration technique to restore his Little Pleasure.

Balack's memories are projected without any censoring in reverse order by a projector of the Command Center. The Internal Affairs see scenes, such as he was cut the thing off and Mole face's limbs was ripped by Balack so the bloodshed with the Security Department was caused.

In Sixteen (29) - Ch.116, Max orders Edel's execution upon capture and he should ask Mr. Tear, the Ripping Thunder to handle this job, that outta let the poor souls those Balak ripped into pieces rest in peace.

In (30) - Ch.117, he says to bull horn that he like Edel's reason for escape, but it's a shame that Edel is Balak's nephew, so he can't wait to get his hands on Edel and tear Edel into pieces. Gatsu says to Balak that it seems that Max sent him for the job.

He says to bull horn that they aren't done until they see Edel's dead body, so they're going in as soon as the raid is over.

He prevents the air raids. Edel continues to kisses with Nell for half the day under the protection of his uncle. The problem is that

When Balak was worn out, Edel is chased by bull horn and him. He tells Balak that, he's going to kill them because he has an extreme grudge against him, and he fires a ray through the machine in his mask's mouth, and Edel blocks the attack. However, bull horn uses teleport to send him to Edel's back, and he tries to cut Edel's limbs and neck. Balak succeeds in dimensional manipulating before Edel's body is torn.

He's about to kill Balak as well. But strangely Max gives an order they don't expect. When Gatsu's men arrives at the scene, they finds unconscious Balak lying on the ground, Edel dismembered in 2 dimension, and a crying Deva. Gatsu says to Balak that Balak froze Edel into a plane before Edel got completely chopped up, so they can still save Edel with Gatsu's power and the Health Bureau's medical technology, but Edel will have scars because all they can do is just reattaching Edel's tissues and stitching Edel's up. Therefore Balak promises Gatsu to go back to the chapter.

In 12. A.E. (3), 1 month ago, Skellion says to Ferdo that he's heading back as his mission is almost complete and he works for the Black Chapter. 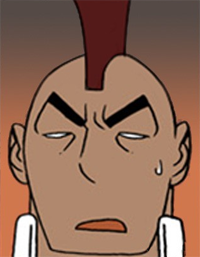 In (4) - Ch.148, he thinks Skellion is suddenly nauseous and touches his back. And Skellion goes to the restroom. Korah tells the beer he drank contains a liquid bomb that reacts to sounds, and the bomb will go off when a triggering sentence is read aloud. And Korah shows billiard ball 5 and tells Skellion is just using the same trick he used to beat Skellion in the game. He asks it's Balak who's behind this. Korah tells he's good at acting and reads the triggering sentence. "Once a target, forever a target. The Balak's way." He's killed because of the bomb. Korah reports to Director Balak by network.

His ray is his own ability, and it's more likely to control the shape of the beam with a masked machine. 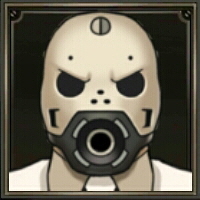 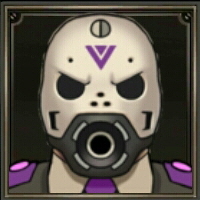 He fires high-cutting energy with fit the nickname of the Ripping Thunder. Nobody knows his face.

In Denma with NAVER WEBTOON, Tear is playable character.

Retrieved from "https://denma.fandom.com/wiki/Tear?oldid=14380"
Community content is available under CC-BY-SA unless otherwise noted.