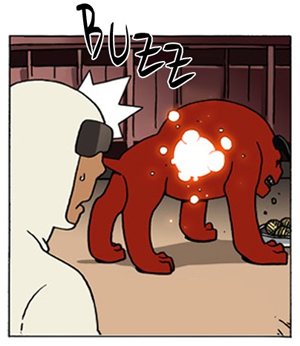 It's a power to summon forth an organism from the other universes.

The U.C.S. Bureau know the chief has already let quite a few cross over to universe eight. The emergency meeting for the U.C.S. will be held soon, and there'll be some serious changes in security and overall management system of here. U.C.S. have concluded that the aftermath of the broken there of the Church of Madonna began to influence them as well, so they're on high alert. The new management law will even include Quanxs who possess this power, so it'll be that strict. Both the security and management system will be ever so strict and aggressive.

In Kuan's Fridge (49) - Ch.580, Devarims try to use this ability. Aaron says to OBs that to thinks the box full of drugs was opened by the wrong guys, he gets that Kuan made the decision to minimize their casualties, including his death, the causality they predicted continues to go off course, because Ran of the causality's intervention is becoming more and more noticeable, and he keeps changing the incidents according to the church's plans, in order to stop his intervention, they need to add new conditions from other universes, in other words, they need being from other worlds to keep crossing over to the universe eight, so his calculation of causality becomes overloaded, and they can use the Intersecting Space, or Quanxs who can summon beings from other worlds, what they need to do right now is to get as many Quanxs with summoning power as possible, and dispatch them all throughout the universe eight. At this time, Ran smiles.

Ran says to his secretary that the Devarims want his causality calculation to overload, and one of disturbs his calculations is the Quanxs with summoning ability, but they're using their own time and resources to locate every single one of them who're outside of his calculations, because the influence of the church's timeline can't reach them, all they've to do is watch their movements, and leave the clean-up the the church's sweepers, for example, the White Snakes and Internal Affairs.

This ability is the opposite of Banish to Otherworld.

Aaron says to OBs that their effort to secure a Summoner Quanx is hindered by the church from everywhere, but still they can't stop now, even though they know there'll be more meaningless sacrifices. Aaron says that they've to make it look like they're focusing on finding a Summoner Quanx, because he has found a new strategy, and Ran, the monster of causality, soon, he'll fry all the circuits in his head with overload.

Retrieved from "https://denma.fandom.com/wiki/Summon_Otherworldly_Creatures?oldid=13209"
Community content is available under CC-BY-SA unless otherwise noted.