Sumai (수마이, Sumai) is a character in Denma.

Maybe he's a noble. He owes money to the El family.

In Kuan's Fridge (4), in the planet Moab, the horse men covering Quanxs' eyes, and take the Kuan's Fridge. A horse man opens Quanxs' blindfold. His henchman appears and says if Quanx succeed, he get 20%, and if he fail, for the sake of maintaining secrecy, he'll die, and he hopes he'd understand because it's not like they've much of a choice either. When Quanxs fail, his henchman kills them.

In (5), he appears. He asks to his henchman that how long did he say it would take to convert the item in that fridge into money and do a bank transfer. Someone's henchman answers that, he assuming whatever it's in that fridge is top-notch like the rumors say, one week, so they're on a tight schedule here. He says as Ibon (Ivon) just heard, they're running out of time, and if they can't get it open in two, OK, three days tops, he'll have to pay for all the interest they owe, because he said he'd handle it, and they counted on him, and they didn't even consider any other options, and ergo, it's his responsibility, and it's how business works. Ibon says he'll find a Quanx who can open that door in three days. He says Ibon can take his time, and aside from the principle, he's the one paying for the delay, and he hangs up the phone. Ibon calls him to Sumai, and he says he knew he shouldn't have made any deal with those thugs, and he just dumped the whole thing on him if it was so urgent, at least he should've given him a down payment.

Ibon calls to Juwan and says he bet Eldgon can open Kuan's Fridge. Juwan surprised and says he took his offer, and he told him he wouldn't do it so he asked him, and he know he's desperate and all, but who knows what he'll do to him. Ibon says he can tell at him all he want, but at least lend him some money before he does. Juwan says may he rest in peace, old friend. Juwan gives a list of Hyper-Quanxs from Moab, a planet that has nothing to do with him to Ibon, and says he haven't got much time, so it'd be better start looking for a solution there, and maybe he'll get lucky and find someone who can open that door. Juwan says it'll be nice if there was a key to that fridge, which is the deceased Kuan had a fridge membership card, he's telling Ibon it would be quicker to look for that instead, but then again he has already looked into that, so he's a dead man anyway, and he'd better start saying his prayers, and maybe he'll see a miracle.

The Hyper-Quanx brings Ibon to the planet Moab. Ibon thinks he should be grateful he got this far, and right now, opening the fridge isn't his top priority, and the key is to show them how hard he's trying be coming all the way down the planet Moab to look for the right Quanx himself, and after all those years of doing business, he didn't expect them to drag him down like that, and if he get it open, great, if not, he'll sacrifice as many Hyper-Quanxs as possible until he get it open to calm their nerves down.

Ibon calls to Mustache. Mustache says this isn't allowed, because he doesn't know if Ibon isn't a scout from an outer planet, and nowadays, bunch of thugs out there move from planet to planet, selling off any decent Quanxs to the nobles, there's such a thing as business ethics, and they think they can do whatever they want in someone else's turf. Ibon says if he can't Kuan's Fridge open in three days, he's in big trouble, that's why he's in the planet Moab. Mustache says Ibon is the numnuts he screwed over this time. Ibon angry and says Mustache doesn't talk as if it's some gossip him overheard. Mustache says he lend Ibon a Teleportation Quanx, and normally, he charge 1,000, but he's feeling generous, so he'll give him one for 700. Ibon says he knows 500 is more than enough. At this time, Mustache teleports and says for 500, he'd have to do it himself.

The secretary shows Ian to a hologram and reports they're his henchmen. The secretary reports the circumstances suggest his after some drugs one of the banished organizations left behind, and he seems to have high expectations for both the quality and quantity of the merch. Ian says the way he sets his goals and carries them out it's so like him. The secretary reports it appears he provided Quanxs to the outer planet dealers, and he didn't want people in planet Moab know about his dealings, about five or six Quanxs have made attempts so far, but they all failed, and he asks they should strike them now. Ian says they leave his henchmen, because Kuan's Fridge isn't something a Quanx can open anyway, besides, all they got at the moment is that he's after the fridge, too, but that's not enough of a reason to arrest him, and they've to deal with them inside the fridge. Ian says his henchmen probably expect to see some cheap drugs inside the fridge, and she wishes she could be there to see the looks on their faces when they see what's really inside.

He says he doesn't wanna hear Ibon's excuses, and after he opens the fridge, they'll talk and his henchman just tell him that he needs results, not just hard work.

The police calls and reports to Ian that Kuan's Fridge just opened. Ian sees the fridge and thinks she knew that, Kuan was up to something when he mumbled so he wanted this to happen. Ian orders to Alpha squad that they just secure their key first, and put them all inside the fridge and close it right away, and once the police retrieved the key, make sure he get out of there stat, and he use the key to get in and out of the fridge just like she told him, and in the meantime, have the other squad members open the fridge door again. All the rest go into the fridge, and they see heads. His henchman calls and reports to him that the fridge is opened. His henchman sees horse men and confused. Ian orders to police tactical team that they close the door. At this time, his henchman's call is cuts off. Ian orders that the police open the fridge again with the key he got, and it'll lead him to a different place, which is filled with the stuff he's actually looking for.

He shouts why can't he get through the connection and his henchman said he opened Kuan's Fridge hours ago. He thinks this is bad if he can't make the payment in time. He calls to Marvin who's drinks tea in a thermos that please send in good words for him to Master Hazz, and due to unforeseeable circumstances, the payment is going to be delayed a little. 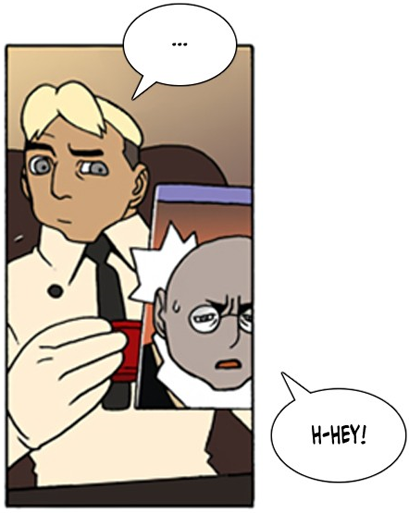 At this time, Marvin makes a strange look. He says Marvin don't give him that look, and he knows more than anyone how diligent he's, and he has to help him convince Master Hazz. Marvin says he guesses he could fill in the loan temporarily, but he make it fast, and he knows what Master Hazz is like, and he gotta go now. When Marvin hangs up the phone, he calls and orders to his the other henchman that they should gather everyone, because it's time to do business, and he'll going himself.

His bat drone flies to his spaceship. He sees a hologram which shows a SWAT team move drugs, and he's disappointed that he's ruined, and his entire fortune now belongs to Hazz, that pig. He rolls on the floor and shouts that it's the agony and the humanity. His the other henchman is holds him. He says to his the other henchman that who's him, and he's not paying him. His the other henchman releases his hands, and says to horse men that they heard him, and he can't pay them, so let's just take this spaceship. He calls to Marvin who's holds his thermos lid, and says that he tried to steal drugs, so he could pay back the money, but a police inspector who has him at the palm of her hand took the initiative, and he says with Aorica gone, those drugs belong to whoever gets the first, their worth is enough to buy a whole planet, what he's saying is that he can take the drug, and let him cash them out without any trouble. Marvin shouts that Master Hazz would never allows the drug to this. He says this is a reliable message from those who were exiled from Moab, and it's not any normal quality or quantity he's talking about here, and what's inside are the Hourglasses. Marvin tells it to Mayhen, and it means that he's a spy of the Gosan family. Mayhen reports it to the Director of Pax Industries. The Director of Pax Industries runs to Gosan's room. Gosan sits to chair and calculates to his Causality Calculator, and Mayhen is next to him. The Director of Pax Industries reconfirms to Gosan that those are the drugs from Aorica. Gosan says it seems that way. The Director of Pax Industries asks that what Gosan is calculating now, and he answers just this and that. The Director of Pax Industries says if they really are the products from Aorica, then the rumor that a few members of the White Police Guards smuggled out a huge quantity of drugs was true. Gosan stands up and says he's going to get those products back. The Director of Pax Industries says they're drugs, and he asks that why the Gosan family would want to get their hands on that. Gosan says if they really are products of Aorica, then the Duke bought them with his money 20 years ago, so obviously, they're the Gosan family's to claim.

Marvin calls to Hazz and reports that, he tried to steal drugs, so he could pay back the money, but a police inspector who has him at the palm of her hand took the initiative, and he says with Aorica gone, those drugs belong to whoever gets the first, their worth is enough to buy a whole planet, what he's saying is that he can take the drug, and let him cash them out without any trouble. Hazz is unpleasant that those hooligans always have a way with their words. Marvin says but he isn't lying. Hazz thinks something and says that if what Sumai is saying is true, the value of those products far exceeds the legal boundaries, and the El family don't have anything to lose, so let's check it out.

Retrieved from "https://denma.fandom.com/wiki/Sumai?oldid=14440"
Community content is available under CC-BY-SA unless otherwise noted.