Soy (소이, Soi) is a character in Rami Record, Denma.

In Yanggun's Miscellaneous Thoughts, the author drew many prototypes of the Rami Record and Church of Madonna. 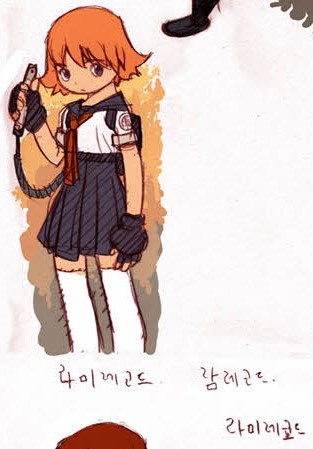 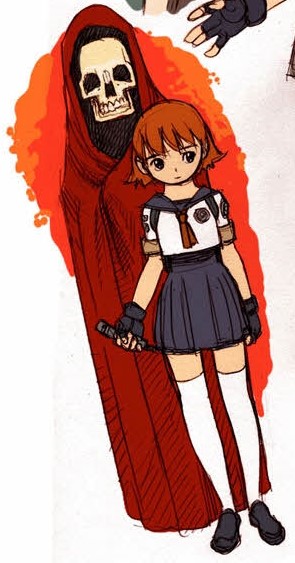 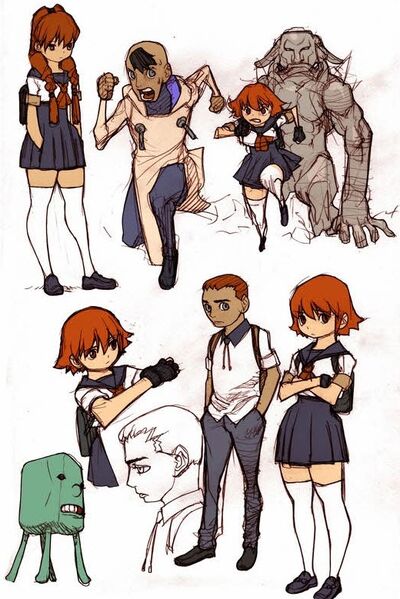 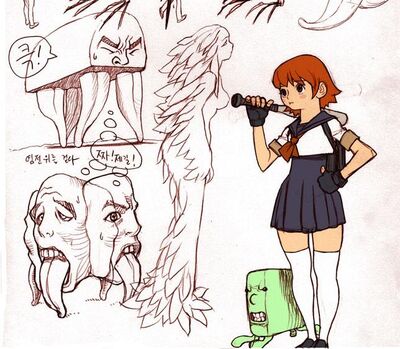 In (7), when it updated June 17, the author drew the prototypes of the Pigears.

In A Catnap (1) - Ch.323, she's holds a doll that looks like Yahwah. The girl says she's tired and sees her. The girl asks where's her brother. She answers that her brother is with his friends. The girl calls to brother and angry that she told him to take care of her. The brother says he told her to stay close to him.

The girl slaps her brother's hip, and she also slaps her doll Yahwah's hip.

At night, she sleeps. The boy lies down and says his sister is always hate him and he want to hang out with his friends too and he takes care of her more than her does.

She wakes up in the morning. Inside the bus, where Yahwah was drawn, she holding a Yahwah doll and gives her sister to a lollipop. The girl says to her brother that behave well at school, and the brother says the sister is talking about her. In the class, the girl thinks she's sleepy, and she shake hands to her outside the window.

The teacher handed out the chocolate pie to the children. A boy asks to the teacher that give him three because he's cute, and teacher answers that he's so brave. She eats one chocolate pie and puts the remaining one in her bag.

While Rami goes home with carrying her on her back, the brother asks that they can move to a place without stairways.

Rami wakes up at dawn and she says to brother that she has to get to work by seven starting today. On the bus, Yahwah is drawn and her name is written. Rami, brother, she are sleeping. In the school, Rami says to brother that he takes care of her till her teacher is here. While brother sleeps in the classroom, she goes to her friend with holds a chocolate pie. Rami's friend tries to deliver chocolate pie instead, but takes a look at her face and takes her to the Palace to deliver it directly. At this time, Hades arrives at the Palace and says he can never guess what the church's old fossils are orders to attacks the chemical complex, the biochemical lab, and now the Palace, and they'll use him and get rid of him in the end, but they have no idea what will happen soon.

In (18), Rami sees her mother holding a doll and singing a familiar lullaby. It was a stone Soy doll with broken. Rami wakes from a nightmare. At this time, Rami sees her friend and she. Rami welcome to chocolate pie angel and says Jay's ass will be on fire today. At this time, a loud noise is heard, and she falls down. At that moment, the ceiling of the building collapses, and Rami see she's buried in front of her.

In (19), while Rami is shocked, her friend sees the debris falling over on her and saves.

In (34), after waking up from bed, Rami cries with the teacher and her friend, Jay, after heard that she's dead.

In (55), Rami and Jay went to her and other people's funeral and she cries and Rami's friend was hugged her. Jay, monk, teacher saw that. At night, Jay and Rami lie. Rami cries and Jay sees Emotion transferring bot and confirms she's crying. Jay blames himself that if he didn't fall asleep she died because of him so he's sorry for her.

She with monk takes care of the garden, and she washing dishes, cleaning, but she has a sad face. At this time, teacher calls her. Jay is blaming himself even more and he's been checking her emotion bot. The teacher shows Jay and says even at school, she doesn't think Jay is eating so it looks like he'll get sick.

Rami with monk takes care of the garden, and she washing dishes, cleaning, but she has a sad face. At this time, teacher calls Rami. Jay is blaming himself even more and he's been checking Rami's emotion bot. The teacher shows Jay and says even at school, she doesn't think he's eating so it looks like he'll get sick. At the evening, Rami says Jay should come to the roof top when he's done. In the roof top, Rami says Jay will miss her. Jay is cries and Rami hugs and says she miss her too.

When Jay is sleeping, Rami manipulates Emotion transferring bot. Rami copies a avatar of happiness, to pastes into a avatar of sadness. Next day, inside the bus, where Yahwah was drawn, Rami and Jay are sleep. Rami moving dishes, cleaning, and takes care of the garden. The monk gives to Rami a bag, because he want Jay to feel better. The bag contains lollipops and chocolate pie, which are related to her, so Rami feels something.

Rami meets Honma and Hades. Rami says she just lost her youngest sister from terrorism at the Palace and if she lose her last brother here.

Jay thinks still no other connections and he sees the avatar of the Emotion transferring bot's smile. Jay imagines that, Rami says because of him she died. Jay denies it.

Jay thinks and cries that Rami is really happy that he's in this mess, because he always cause trouble and he couldn't even protect her.

She holds a Yahwah doll. She runs to Rami. Rami calls to Jay and angry to him. Jay also angry. This is developed from the contents of A Catnap (1) - Ch.323 in Rami's viewpoint. In Yahwah's dream, she sees she and Jay and sheds tear.

Yahwah thinks he fell asleep and he's curious that why he's so teary, and who're those little kids.

Retrieved from "https://denma.fandom.com/wiki/Soy?oldid=14409"
Community content is available under CC-BY-SA unless otherwise noted.