Here's a secret security team that is the highest executive group directly under Holy Madonna within the Church of Madonna, so their member can fire the Internal Affairs Director in the next 5 minutes, or deport someone to the planet Gaia.

There're at least 2 or 3 guys from there in each group of the See.

Since Hades was arrested Edit

In A Catnap (57), Black hair thinks their customs aren't that easy to go through so he's overreacting, and it's Balack that he has to focus and there's something awkward about the investigator of the See's Command Center too. Black hair asks his senior, White hair to project Balack's memory in secret. White hair rejects this because if he did that without the Director's authorization he'd be arrested. Black hair mentions here. Black hair threats and says to White hair that, he'll fire the Internal Affairs Director in the next 5 minutes, or he'll deport him to planet Gaia. Black hair orders that the order from here's an order from Holy Madonna so White hair should project Balack's memories now so he can see them himself.

White hair and Black hair were surprised at Balack's memories, when he saw he killed Gray marks. 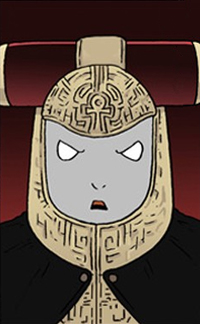 Actually, the Director of here's Gatsu's Bishop. Gatsu covered it as an accident that suffocated and killed them both because of the malfunctioning of the ventilation system when the waste management company changed the fuel rod, so they're each died in the bed and sauna. The Bishop orders Gatsu to get rid of Balack immediately.

In the past, Gatsu gave an instruction to Balack that he cut the power for cable line 35. The Bishop sees this sight by CCTV, and she asks to Purple hair that what's the cable No. 35. Purple hair answers that it becomes the electric cable for the Transcriptome defense system when the main electric cable is off during the change of fuel rods. Purple hair says the behind was an outer channel, so it's not confirmed yet, but it seems like a channel that the Patrons use, and it's likely that the Patron could be one of the highest ranks since Gatsu did it knowing the Bishop's position in the See. The Bishop thinks Gatsu needed money for the connection with her since he survived the bribe competition, but still lying to her and disobeying her order isn't acceptable so she'll get rid of him. The Bishop orders Gatsu is forming a pursuing team so Purple hair tell the Director of the Internal Affairs to put he and Balack in the advance party with him, and she shows the reference which is a big picture that he drew out in the last non-disclosure pursuit, so she want him to draw a picture that could show the See's decisiveness to the Patrons. The Bishop says Purple hair is an agent from here who's working as the Black priest of the Internal Affairs Department so he should work away from the office this time. Gatsu is out of the surveillance to deliberately connect to the outside channel, and requests to the projector that he would connect to the Command Center's human resources network and tell him if there're any other agents from here in the Internal Affairs Department. Gatsu thinks Bishop Kanu is the Director of here so she's definitely going to tell her agents to do something.

Gatsu receives a message, and he sees Purple hair in this. Gatsu thinks an agent from here's also in the advance party, so the Bishop want to get rid of Balack and him, and he was being loyal and did everything for her and yet she treat him this way, so he's going to do something to her. Kanu sees the Duke's image and asks to Purple hair that he's really gave him his work. Purple hair answers that the Duke is right according to the channel analysis, and Kanu thinks he's very unpredictable. Kanu thinks the Duke isn't satisfied so he ignored the nondisclosure agreement and caused all this mess in the Internal Affairs Department. Kanu orders Purple hair to make sure to handle this right. The Director of Internal Affairs calls the last meeting for the advanced party, Purple hair goes there. Gatsu says to Balack that Purple hair is the agent from here. Balack suddenly calls Purple hair to Security Management, and catches his shoulder so he's surprised. Balack threatens Purple hair and says he'll watching him so he doesn't even think about it.

Gatsu says to Purple hair that he can tell the Bishop that he know very well to whom his life depends on and that he'll be more useful later on so she should use him a lot more.

Purple hair was able to convince the Director of here and the Command Center so he took the Security Department out of this and shut down the Transcriptome defense barrier. The Command Center orders to the Security Department that they're out of this mission because they could cause confusion, and it's 'cause of the collision last time and they've decided to let the Internal Affairs Department handle the situation because they're already in the Palace.

Retrieved from "https://denma.fandom.com/wiki/Security_Management_Department?oldid=14556"
Community content is available under CC-BY-SA unless otherwise noted.