This is a episode. For extraterrestrial life, see Pigear

It has Pigear planet as its background. Some planet is also appeared.

In Volume 5, it's revealed that this is a story about a filthy, smelly, cowardly and weaker male Pigear, and a beautiful female Pigear, which is said to god created the universe to show her off.

In (5), Jet's line "I am a man that can easily handle 17 thugs." comes from an famous line for Chang-jung Lim's comment on Korean film Beat. 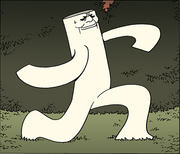 A.E. (1)
Add a photo to this gallery
Retrieved from "https://denma.fandom.com/wiki/Pigear_(episode)?oldid=12162"
Community content is available under CC-BY-SA unless otherwise noted.