The people doesn't know what religion Youngsoon Yang believes. But the author has read the Bible. Therefore, the author often puts parodies of the Bible in his works.

It also includes parodies that appear in web fiction.

The name Maat comes from the Maat. And the word Maat is Egyptian mˤ3t origin.

Here people dress in like school uniforms. See A Catnap.

Taesaja looks like ninja. The name Taesaja comes from the Taishi Ci in Romance of the Three Kingdoms.

The word Enoch comes from the Enoch (ancestor of Noah) or Enoch (son of Cain). Enoch is Hebrew חֲנוֹךְ origin. It means "initiated".

The word Ssaurabi, which is fighter (or warrior) comes from the Ssaurabi.

The name Abigail comes from the biblical character Abigail. And the word Abigail is Hebrew אֲבִיגַיִל, origin. It means "father", "leader" or "cause of joy".

A Dog of Pamana[edit | edit source]

The title comes from the English origin. It means "Power outage". If Ephraimite Quanx uses E.M.P., there will be a blackout.

The title comes from the TV series Band of Brothers.

로드 (Rodeu) of the title, it means both lord and road. So 로드 of the Korean title has ambiguous words.

The title comes from the Quanx ability Marionette and Bahel. Because in (3), Bahel also killing people under the name of Mama, to fill the quota on false hope of being free. So Marionette has ambiguous meaning.

The title comes from the extraterrestrial life Pigear.

The title comes from the phrase of Minzy's twitter profile God's Lover. This phrase isn't uses in 2017. In the fan meeting described above, the author said that, he was delighted to receive a his Twitter follow from Minzy, and at that time he had to prepare for the next episode after Pigear, so he named the next episode to God's Lover among the phrase in her profile. 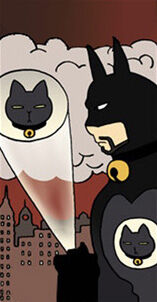 The title means Yahwah's catnap. The kitty music box is in the form of a girl similar to Rami, is sleeping in a cat's breast. The catnap in the title of this episode was expressed as cat + nap. 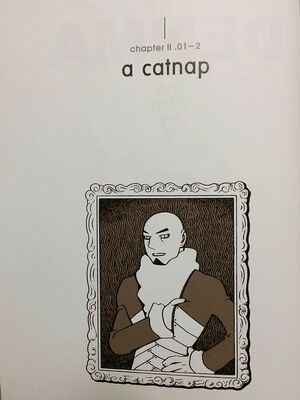 In Volume 7, Duke's pose is a gesture commonly found in portraiture during the 18th and 19th centuries.

Retrieved from "https://denma.fandom.com/wiki/Parodies?oldid=15110"
Community content is available under CC-BY-SA unless otherwise noted.