Moab (모압, Moap) is a planet in Denma.

Denma and Cell goes to their recipient.

In Kuan's Fridge (18) - Ch.549, it reveals that 'The 10,000 Youth Entrepreneur Training Project', the government in here picked out candidates for this project and vouched for them, they borrowed funds from the bank to get it started, but as the recession prolonged funds from the bank, ended up becoming the debt of the individual applicants, angered by the government's attitude that avoided responsibility, the bank made contracts with private institutions to get the principal plus interest back from them, the story goes they were notorious for being ruthless in their so-called collection, once the repossession team cleaned up the place, there was literally nothing left behind, but Mr. Holmes, who's an official in the local government in here and he goes way back with Jiro's father, he heard their attempts with all this foreclosure didn't help much in retrieving their funds back, they had to spend a fortune just to auction off the seized goods, so most of the seized items except valuables like jewelry went straight to the grinder, the foreclosure was nothing more than a way to make their point, the client, who knew this all too well, wanted to protect his friend's family at least, so using his position inside the government, he persuaded the repo team to have Mr. Kuan to take care of the seized items. Jiro's father failed in his business ventures all the time, and the repossession team take away everything clean every two or three years.

In Kuan's Fridge (40), 2~3 years ago, Jiro has been handing out these leaflets around. The leaflet says that Jiro need their help, not too long ago, Gyu-oh who's King himself has his back has been charged by the prosecution, but in order to make him pay for all his crimes, he needs their help, make him pay for what he did to something.

Jiro's mother gave away the hideout to Gyu-oh to save Jiro. So Gyu-oh's goons find out about the Doc and the others' location of hideout. There's a man who wear glasses and the Doc who's red, are exist in the messy room. The Doc says that how they did find out about this place, and all the evidence and the copies of the ledger they've collected over the past two years, gone, and they look them all, and their work is to rid this place of the malignant tumor rooted deep within, of course, she expected them to put up this much of a fight, even if they didn't attack them or steal all the evidence their work would've taken them at least three years, they'll just have to start again from the top. The Doc says she's sorry because she can't take this anymore and she thinks she was wrong, and she should've listened when they told her she should watch who she mess with, and it takes more than goodwill to win a fight and she was such a fool, and the one who made these poor people here suffer was her, not Gyu-oh's goons, and if only she didn't meddle with what's going on here all those phone calls from the children, from their parents, and they tell her that their parents or their children are either dead or dying because of her, that it's all 'cause she meddled with their lives and that she shouldn't run away and take full responsibility, and it seems the organizations that helped them are being threatened as well, it's all her fault. The man says that Doc said they should regroup and start over, but he's afraid Jiro won't be joining them anymore, and that's what he came here to tell him. Jiro asks that is that what the Doc wanted. Jiro says that but the man will need his skills to steal his goons' documents. The man says they'll look for someone else, and he tries to leave. Jiro asks that this was the man's idea, he means, he always called him a junkie, of course, it was his idea, and something like this happens and all of a sudden, he's his number one obstacle. The man answers that it was the Doc's call, and the location of their hideout remained secret for two years, but Jiro's mother gave away the hideout to Gyu-oh, and it comes all the others ended up dead when Jiro just got a few bruises.

The two Quanxs who wear the turban which're written on ㄹ, ㅁ teleport to Gyu-oh and his guard. ㅁ says they all dressed up like the King. ㅁ says Gyu-oh even has the King's symbol written on his forehead. Gyu-oh says it's out of respect, ㅁ grabs him by the collar and says it's more like an insult. ㄹ says to Gyu-oh's guard that he's a Hyper with Interplanetary Teleportation skills. ㅁ says they're the King's Consonant Guards, and if they take Gyu-oh in like this, he'll be killed on sight. ㅁ draws a stick with his ability on the upper part of Gyu-oh's 甲, so he changes it to 申. ㅁ orders to Gyu-oh that he should raise both his hands like the letter on his forehead says. ㅁ says their King's got extra edgy over his ledger, and it's the one the prosecution's got their eyes on, and he says he'll personally protect him from the U.C.S. prosecution.

Jiro reached out to Juwan himself as if something urgent just came up, and he asks his offer is still good. But of course, Juwan had a condition, a reasonable one, he might add. Jiro says he can quit the meds. Jiro says Juwan may just lend him 30 million and 120,000 won, then he'll quit the damn drug and sign a contract with him. Jiro shows Juwan to his business card and says he came to this planet with one of his Quanxs' Interplanetary Teleportation skill, and the last time he checked, Teleporting between planets is a serious crime, and if the planetary immigration office ever found out about this three mil won't cut it, and he won't pay his way out of that one. Juwan angry and says he'll just deny it, and Jiro isn't the first to blackmail him. Jiro says remember before that there's this other Quanx ability that he can never tell Juwan about, it's Memory Reading, and he's holding his dirty little secrets, everything he's done, right here.

In Kuan's Fridge (1), Cell informs Denma that they've arrived at the next destination is here.

Sumai tries to open Kuan's Fridge, because the item is in that fridge is top-notch like the rumors say. Juwan told Sumai that he wouldn't do it so he asked Ibon. If a person who can open the fridge can open it, he get 20%, and if he fail, for the sake of maintaining secrecy, he'll die. So the Bald with a pattern on the forehead is killed by Sumai's henchman.

Juwan gives a list of Hyper-Quanxs from here, a planet that has nothing to do with him to Ibon. The Hyper-Quanx brings Ibon to here. Ibon thinks the key is to show Sumai how hard he's trying be coming all the way down here to look for the right Quanx himself, and after all those years of doing business, he didn't expect them to drag him down like that, and if he get it open, great, if not, he'll sacrifice as many Hyper-Quanxs as possible until he get it open to calm their nerves down. But Mustache says the list of Hyper-Quanxs from here's all Hyper-Quanxs that no one really wants on here, include Jiro.

Denma heads to somewhere with a Red. There's a Kuan's Fridge Membership Card in the Red. Cell says Mr. Holmes requested them to help Jiro retrieve the items in the Kuan's Fridge, which have been seized from he and his family. Cell says twenty something years passed, the economy recovered slowly but steadily, ruthless foreclosure practices of those repo team were finally put to an end just recently after a long trial in court, along with a verdict that those seized items were to be returned to the original owners, and the government, who vouched for those initial applicants, were ordered to retrieve the bank's money on behalf of those applicants, with means other than foreclosure, so at this point when the new law is yet to take effect, their client wanted him to take back whatever he need from the seized items.

The bullies, Jiro's family are in the slum.

The General is exist.

An assistant commissioner, Ian is exist.

Mustache is a Quanx dealer in here.

In The knight, it reveals that the Conqueror is a gang boss of here. Noph and Basil are included in the small organizations connected to the Conqueror. 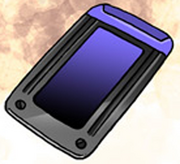 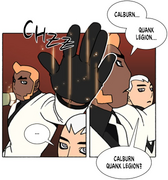 3. A.E. (1)
Add a photo to this gallery
Retrieved from "https://denma.fandom.com/wiki/Moab?oldid=14987"
Community content is available under CC-BY-SA unless otherwise noted.