Maggie (메기, Megi) is a character in Denma.

Megi is old English version's name. And it's means catfish.

He looks like an owl. He seems to be very intimate with Master Sergeant Hador. 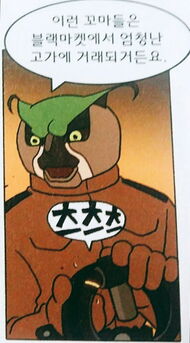 In 2. A.E. link - Ch.11, he sees the videos who captured on Denma's Quanx ability. He collects it, and sells it to the Savoys for 20 percent of the price of Quanx. So he makes a cause of Savoy Gaal. He tells Nasty Jade had a kid who used the same ability as Master sergeant Hador. He restores the curb cut by the Denma with his own ability.

In God's Lover (5), the soldiers of Carlburn's Quanx Squad are go to the one of the safe houses of Carlburn's Savoys, the building is built to withstand attacks from ordinary fire weapons. He sees the record of visitors who entered through the city gate. Hador uses his Quanx ability to steal the chocolate bar that he's eating. Hador says the redhead must be related to the EMP incident and the thing on the back of his head is a Neuro-scanning device used for mind-body transfers, and his actual self is probably an Ephraimite. And Hador says he has seen something similar before. Then Hador says the white hair must be a priest or a guardian from the Church of Madonna and he's a dimension manipulating Quanx. And then Hador says if the rumor about a company that abducts and enslaves Quanx to do their courier deliveries is true, he suspect Silverquick backed by the Church of Madonna, so he'll need U.C.S. on his back and he'll dig more info because an EMP went off in the middle of the city, that's an act of terrorism that jeopardizes the security of Carlburn. And Hador says above all else, he want to meet the kid with the orange hair. Then Hador uses the Equivalent Mass Substitution of chocolate bar to blow a female soldier's button. And the female soldier uses fire breath to he and Hador.

The planet Carlburn, 'T.A.Q.' of the 17th division of the 3rd corps, Master Sergeant Hador and he suggests to the military officer that Hador request an authorization from the U.C.S. to investigate Silverquick. The military officer says he'll file the request to the U.C.S., and the council isn't entirely fond of them Quanx troops. He's worried that they're going to far. However Hador repairing the artificial hand, he says selling off a few low level Quanx only gets them chump money, and this place has the best intel on all Quanx in the 8th universe, but they don't know so little about Silverquick, so it's a jackpot waiting to happen. At this time, Master Sergeant Ford comes and says to him that, he made Jade write his work log and he are out here having a smoke, and he beats to him. Ford orders to him that he report directly to him after finishing the work log by eod. After Ford went, he's angry and says he's going to get him someday.

In Chapter 2 2. A.E. (20) - Ch.527, the Military officer angry and orders to Hador and he that, as of this moment, he wants them out of his sight, because he was meet their demands so he put in a request to have Silverquick investigated, and now, the council has decided to audit the Carlburn's Quanx Squad too. The Military officer says so much for getting promoted, and he asks so what are Hador and he going to do about this. At this time, Hador and he disappear. Outside, he says they messed everything up for nothing so they should've just kept taking money from the Quanxs, and he asks what they're going to do, it looks like they're going to hold them responsible for this. Hador says council suddenly did this, so they were bribed. Hador says let's just leave. He surprised and asks it mean desertion. At this time, someone appears and he says like hell Hador and he are.

Ford angry and says after all the mess Hador have made the Carlburn's Quanx Squad, he talk about desertion, and he don't care what happens to the rest of them as long as he get to live another day. Ford beats Hador and says he did expect would happen after the squad gets disbanded because of him, and they won't just lose their jobs and they'll all be hunted down by the Savoys. Ford stepped on Hador's right hand and let his artificial hand off his arm. He holds so he stops Ford back. Ford tries to beat him, but his hands are respectively Equivalent Mass Substitutes by Hador's artificial hand. Hador says he's not deserting, and he's retiring, and Ford won't be able to use his Quanx abilities anymore, so there's no reason for the Savoys come after him. He says Ford is bleeding so he should lift his arms quickly, and he asks what Hador is gonna do now. Hador answers he can't stay the Carlburn's Quanx Squad anymore anyway, so he doesn't know what he's gonna say to the Battalion commander. He says let he know if Hador find somewhere better than the squad. He says now let's get Ford to the infirmary. And he says Hador can call him.

Retrieved from "https://denma.fandom.com/wiki/Maggie?oldid=15197"
Community content is available under CC-BY-SA unless otherwise noted.