Joshua (죠슈아, Jyosyua) is a character in the Rami Record and Denma.

His mother is Madonna. The people of Church of Madonna are serves him.

Thousands of years ago Edit

In Yanggun's Miscellaneous Thoughts, the author drew many prototypes of the Rami Record and Church of Madonna. 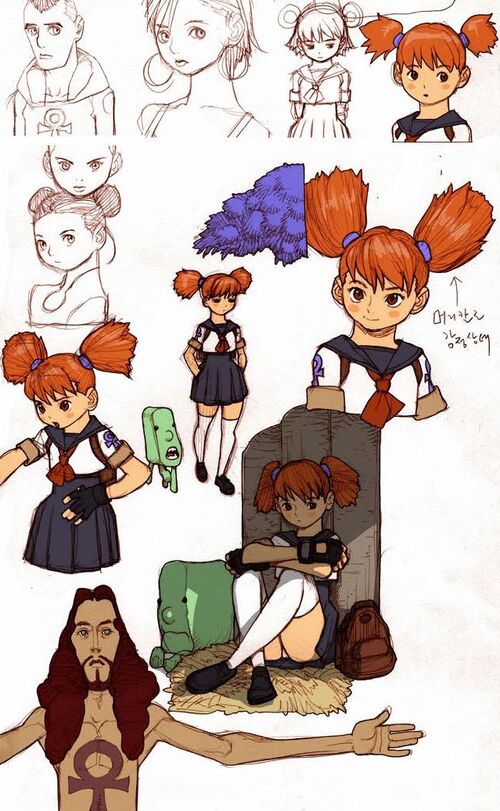 (18), it updated July 12, 2008. A prototype of the origin of the Church of Madonna. A pioneer who's caught and tortured by the king on charges of disturbing the world and spreading dangerous teachings to the people. In order to protect Madonna's son's life shortly before his dead, she destroys the singularity of the Intersecting Space, the secret place of the kingdom. With the destruction of singularity, his soul is scattered into each of the intersecting spaces...

In Rami Record, the plot says, his soul, who was murdered by cognation and scattered in here of parallel universes... starting from here, the religion of love and retribution 'Church of Madonna'.

In (1) (Korean, In Denma, it's (1) too) - #1, Madonna worked as a butcher in the imperial kitchen. The new husband John, whom she met there, became a wonderful father to her son, him. A saint who conveyed the message of faith, hope, and love. As the people who have been saved from the suffering of life through his sermon have increased, he's eventually sentenced to crucifixion by scribes of cognation who're threatened by his presence. And on the day of execution, he in front of God experience the absolute solitude of the universe... Frustrated by his execution news, Madonna and her husband and the his 12 apostles jump into the deadly perils to save their son. Madonna's choice to save a dying son after her husband's death was "Virgo Intactium", an imperial super-secret space called the realm of God. With the collapse of the singularity that was the intersection of parallel universes, the his soul is scattered in each parallel universe. Madonna says that the soul of God, he's survived, and that when he comes back here again, those who killed him will be dead. After a miraculous escape with his 12 apostles, people began to flock to Madonna. And a new sermon is passed on to the suffering people... This is the origin of the religion of love and retribution, Church of Madonna.

In (2) (Korean, In Denma, it's (1)) - #2, Rami is Pre-Priestess who's attending Mission School, the House of Dancing Flowers, which is established by Church of Madonna. This religion serves both the Mother Madonna and him.

Holy visits is a business trip to parallel universes according to the instructions of church body to find his body. The priestesses are given a role to look for his body along with the Guardian priests. It's a duty that must be accomplished if Deva, the top priestess of the church body, is her future hope. They must fill the blood ampoule's quota. Since the opening of the House of Dancing Flowers at this point, only two people have found his reincarnated body and become Deva. But nowadays they find his reincarnated body and don't become a Deva. 99% will become Deva according to their grades.

In Denma A Catnap (13), Abigail says he came to put Hades to rest in the name of Madonna and in the name of him, rest in peace, and he uses Passionate Banging.

In (16), the picture of the Palace which is depicting Madonna cradling his body is parody of Pietà of Michelangelo. One of the baby angels around her senses Hades, the Quanx and sends out a baby angel Transcriptome.

In (54), the Duke dithers and calls Mayhen that why Agnes unresponsive for the past hour, and if something happen to her he can't live without her, and maybe he shouldn't has listened to her insisting and let White Police Guards escort her, then he floats white 100 image and tries to call them. Mayhen says right now Agnes is asleep because it's only been 2 hours since she said good night to the Duke. The Duke says that's strange because it feels like it's already been 12 hours, then he angry and says the stubborn principalists even told Agnes to do the retreat duty and there're certain Patrons that aren't to be touched, and back then they came to him for help while talking about the fate of the See. 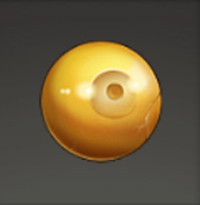 Denma with NAVER WEBTOON, a halidom of Church of Madonna, which retains Joshua's memory.

See Joshua's eye. They're gems that look like human eyes. The readers don't know if these're the real his eyes. Count El and his man goes to the Duke and he says he has these for him. El's man substitutes his an eye by matches the mass with some metals on the left wrist's wristlet, and El says he has the other one. The Duke breaks his an eye and tries to put El and his man in underground prison. As El is being held, he says he recently heard that the pseudo religion is taking over one of the military supply companies so this item should make the Duke the shareholder of the company and that will make him the actual owner of the eight universe. When El and his man are gone, the Duke says Mayhen that if people want to make a deal with him they should be as prepared as he's so he likes El, and he orders she'll go do some research on him because when it shattered he didn't look shaken up that means he doesn't really know the value of what he brought so he thinks there's a guy around him that's pretty good. In the meantime, Mayhen restores this to her Quanx ability.

In Yael Road (9), Denma mentioned him.

In Kuan's Fridge (50), Ran prophesies that due to the recent event on Moab also known as the Kuan's Fridge, there will be a major translation in the universe eight, it's several times harder to act powerless when the person is actually powerful than acting powerful when someone isn't, all that consistent hard work will finally pay off, the church will get a new partner, the strength of both the new and old White Police Guards are evenly matched, but Gosan's arrogance will lead him to make a fatal mistake, the bloody battle of Hypers will go down in the history of the universe eight, he'll lose this fight, and it'll lead to his downfall, and he'll step down from his throne, and the one who'll replace him will be El of Urano, as his era begins, the church's secret project, 'Denma' will commence, where he'll be brought back to life. At this time, Denma appears.

He doesn't appear as a character or a monster, but he's mentioned in some halidoms. 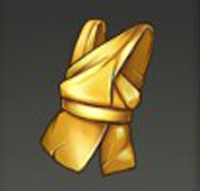 A halidom of Church of Madonna, the last time Joshua was wearing. 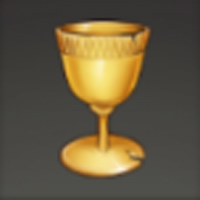 A halidom of Church of Madonna, it was used for Joshua's dinner. 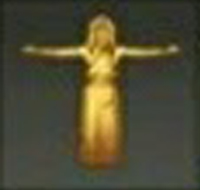 A halidom of Church of Madonna, that depicts Joshua when he was alive. 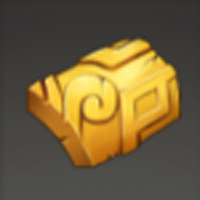 A halidom of Church of Madonna, in the form of fragment of sarcophagus that Joshua was entombed. 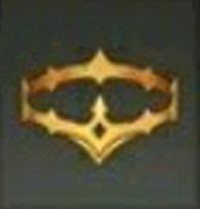 A halidom of Church of Madonna, with Joshua's suffering pain.

Retrieved from "https://denma.fandom.com/wiki/Joshua?oldid=14418"
Community content is available under CC-BY-SA unless otherwise noted.