Jinu (지누, Jinu) is the character of Denma.

He moved from planet Pamana to planet Terra 20 years ago.

He has wife and a son. 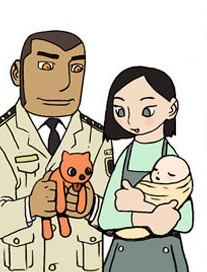 His father's name is McLight, And he settled Pamana 17 years ago. McLight has been a mercenary for 5 years in Planet Thesis. In the meantime, Jinu has a girlfriend named Mina. He became irreconcilable with McLight. When McLight was coping with a year-long separation from Joanne, Jinu's mother, a viral disease outbroke in Pamana. Joanne became one of its many helpless victims. Soon, the rumors started, that mercenaries of planet Thesis were the cause of the deadly virus.

One day, he got attacked because he was a mercenary's son. So, he and McLight decided to move to planet Terra. Animals weren't immune to the deadly disease, and McLight had no choice but to transfer Max's consciousness to a robot via costly A.I. neurosurgery. At the time, McLight didn't realize what that could have meant to him because he was so desperate to save Max. He was very angry with McLight for not using his money to save Joanne. After paying for Max's treatment, McLight could only afford to send him to Terra. After that, McLight gets infected. Then thieves came to the McLight's home. Thieves break up Max and sleep. Max ended up like porcupine shape to protect his master. After the retrospect, McLight leaves a last word to him.

A few days ago, he received an unpaid electricity bill from the Pamana electrics. The 20-years worth of unpaid bill had just exceeded the remaining price of his home mortgage. He shocked then asked Silverquick to rid of the source of power drainer using a portable EMP bomb. There is a skeleton in the living room of his old house. He tells Cell that the skeleton is his father. Then he sees the robot it is next to him and says it's Max, which is father's dog. And it didn't look so hideous back then, though. And then he says Denma if it's the problem, just rid of it with an EMP. Denma finds a old memory card and a vid-player in the drawer and gives it to him. He throws the drawer in the trash bin. Then Denma asks him whether you are a perfect father. After Denma left, he pulled the drawer out of the trash bin. The drawer contained a video left by his father.

After watching the video, he cries when he sees a picture in the client report given by Denma. Meanwhile his son sees the video.

Retrieved from "https://denma.fandom.com/wiki/Jinu?oldid=14355"
Community content is available under CC-BY-SA unless otherwise noted.