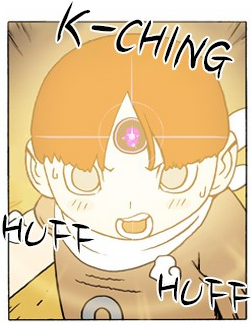 The EMP bomb can cause this. An electromagnetic wave pulse that disables all nearby electronics, and no direct physical damages are induced.

This skill can be used when the Ephraimite becomes Quanx. When Ephraimite Quanx explode in anger or sad feelings, an enormous wave of electromagnetic bursts out of the body.

It causes Night of Adams. 5 years 4 months ago, near the end of Matthew's training period, he receive the his mother's death notice from Edrei. The agony of losing Matthew's mother and the anger from being shackled broke loose all at once. Since Matthew has a Hyper-level Quanx like Crying Daddy, the entire Silverquick system shut down, and the station fell under complete darkness. Even the tiniest, extraneous noise died out, and everyone instantly knew that this was no ordinary blackout. Then, someone broke the rule. And then, they thought nothing could control them anymore. The place soon turned into bedlam filled with violence and madness, stemming from years on pent-up rage. What they didn't know was that the main generator in charge of station's core power wasn't affected by the E.M.P.s. Within 30 minutes, all sub-generators and the entire system was restored. Then, the retaliative top-level security measure, Night of Adams, took place against the 2,000 revolting Quanx. It was a massacre. Of the thousands, only a dozen including the Crying Daddy's closest friends and Crying Daddy survived. The station's generator and power system are still the same as they were 5 years ago. In fact, it turns out that Yahwah had deliberately caused it to find his original body. The deputy director of Internal Affairs' secretary says Yahwah even fell into coma from the aftermaths of the damage control.

In 5. A.E., Arcel goes to the toilet alone while he's taking classes with Edrei. By the way, Ballack comes and tries to rape Arcel. At this time, Arcel's feelings explode and Ballack stops for a moment because of the flash of his forehead. Yahwah refers to the Crying Daddy's closest friends who got a better experimental material called Arcel. At this time, it's revealed that the entity of Arcel is a young woman named Edel, the Ephraimite. Yahwah commands Ballack to harass Arcel.

In Savoy Gaal (5), Arcel reveals to Denma that he's Ephraimite Quanx. Denma calls Jet when he's running. In Pigear (9), Denma says to Jet that he found a friend who can hang out with him. Jet keeps running and hangs up. In the spaceship, Jet sees the sign language in the recording video that he spoke with Denma and notices that Denma has found Ephraimite Quanx.

In (8), unlike the other Quanx, Ephraimite Quanxs are black with a border-broken shape which is measured by the Georg filter. Gaal sees this and his junior Savoys are lose all electric gears, and change into machine. And Gaal thinks he's the only one here who has an experience with Ephraimite Quanx, and the booster gun made by Mirai is free from this.

Arcel is participate in the Savoy punitive action, he plays stopped all the systems in the building where the Savoys are located.

In God's Lover, when Ballack start an argument with his green friends for the revenge of his broken leg, Golden hair pulls Ballack and his friends' heads off with his bare hands. And Golden hair is taken by the Adams.

Sergeant Maggie sees the record of visitors who entered through the city gate. Hador says the redhead must be related to the EMP incident and the thing on the back of his head is a Neuro-scanning device used for mind-body transfers, and his actual self is probably an Ephraimite, and he has seen something similar before. Then Hador says if the rumor about a company that abducts and enslaves Quanx to do their courier deliveries is true, he suspect Silverquick backed by the Church of Madonna, so he'll need U.C.S. on his back and he'll dig more info because an EMP went off in the middle of the city, that's an act of terrorism that jeopardizes the security of Carlburn.

Adams beats the Golden hair, Eunguy. Yahwah orders Eunguy has killed Ballack, so he'll has to continue on his mission for him. Eunguy refuses this because he isn't a pedophilic psychopath. Yahwah appears directly in a muscular build and beats Eunguy.

Yahwah is included Ephraimite Quanx in the missions even though the Academy of Science were done with their study.

Jet goes to Denma and asks about Ephraimite Quanx which he finds, but Denma answers with he doesn't know. Because Denma's memory after Yael Road was deleted. Eunguy goes to Arcel and says he's sorry.

In (10), Jet says to Ringed baldhead that Denma found another Ephraimite Quanx so if the recent blackouts were caused by Quanx, Ephraimite Quanx's ability will help them complete their plan. Ringed baldhead says he'll tell Apple members to keep their eyes on it. Jet enters his room, but there's Yahwah with a muscular body that sprays HANK on the window. At this time, a blackout occurs. Jet doubts whether the person in here is Eldgon or Randolph. Then, when the electricity came back, Yahwah laughs that Randolph has doing well, and Jet is surprises. Perhaps Eunguy had harassed Arcel.

Jet thinks Randolph doesn't has that sort of ability, and if he had one, he didn't need to go head against those cyborgs in the desert. Jet wonders who's the Ephraimite Quanx that Dike (Denma) mentioned. Eunguy leaves the room.

In 16. A.E. (1-1), Adams beats Eunguy. Yahwah says Randolph has been doing fine, but now he refuses. Eunguy says he doesn't want to does that to a kid anymore. Yahwah says Randolph can't always to what he want, so if he doesn't want to, he'll blow his head off right now. Ringed baldhead says to Jet that he called him back in because he got a report right before departure when he told the Apple members to find Ephraimite Quanx, it said that there was a witness by chance and their schedule is confirmed, and now he's really leaving. Jet thinks he has to capture Randolph before anyone else does, and he's tight up with Ephraimite. Eventually, Eunguy approaches Arcel. Arcel cries and says, Eunguy isn't someone who tortures kids, but he's doing this to him, so he'll get away from him because it hurts. Ivory hair watches this.

In (1-2), Arcel uses his ability. When Jet is washing his hand in the toilet, he sees the temporarily blackout and he's curious. Eunguy says he's sorry. This scene is recorded. Ivory hair says to Jet that the Ringed baldhead told him to tell him this first that he thinks he has found the Ephraimite Quanx and he heard someone screaming so he went ahead to see what was going on and he confirmed it from the video. Ivory hair shows the video. In the video, Eunguy pinching Arcel everywhere. Jet wonders this guy is really Randolph and asks is pinching the only thing he's doing. Ivory hair answers this guy's strength is inhuman so this couldn't get any more brutal.

In this scene, if Arcel's forehead has a flash, the video being recorded should also be turned off. It can be considered that the principles of a general electromagnetic device and a videophone device are different. The author acknowledged the suspicion that the video that was clearly presented during the blackout. So author is modified to appear as noise in the volume.

16. A.E. (1-2), volume 5
Add a photo to this gallery
Retrieved from "https://denma.fandom.com/wiki/Electromagnetic_Pulse?oldid=12606"
Community content is available under CC-BY-SA unless otherwise noted.