Daniel (다니엘, Daniel) is a character in Denma.

His hair is ivory and unusual shape.

He wears a white suit on a black dress shirt and a white tie. Gloves are black. This is White Police Guards's costume.

About 10 years ago Edit 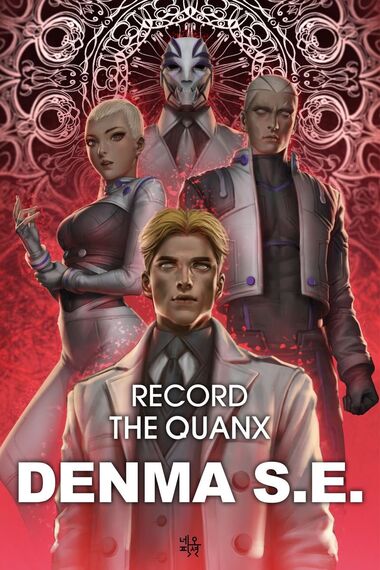 He's the one of characters of The Idolatry of Web fiction Record the Quanx - Denma S.E.

He was an assassin of the Goel Orthodox Church and sent to the zealot to kill Caesar, the leader of Blank of the planet Synagogue. He uses Liquid Mimicry ability and pass through the drainage hole, and he cuts Caesar's right arm by liquid beam emission, but when he hears his words, he gets caught by his guards, Gaya, and by chance he stands on the Blank side. In discipline, Caesar is a master, and Gaya is a senior disciple, and he's a general disciple. Instead he also taught Gaya about the many customs of the gangland and the information that only the assassin knows, such as the situation of the universe eight. He feels nervous that Gaya has hidden dangerous powers. Later, he becomes an executive but still struggles with back-up work with new leader of Blank, Karp, and Gaya. In a sermon of Blank, he was gave a tough answer to the story, and later the newcomer Vashti makes a similar remark, he feels a sense of demeaning. After the end of the sermon, he makes a suggestion to Vashti, clearing it together, then separating her head and body and killing her. In fact, Vashti was the assassin who tried to kill Caesar, and her dead body was settled by him and Gaya.

Gosan knocks out the cafe's robot with a baseball bat and orders he doesn't want the avatar and he want him to bring the one that actually put his hand on the bomb.

The owner of the planet returned safely in a few days drunk. The owner of planet Bella say goodbye to him that please send his regard to his brother and tell him that he'll invite him to Bella soon.

In Chapter 2 2. A.E. (6), it reveals that currently, the planet Aorica is dozens of Quanx abilities delicately put together, which delicately form what appears to be a planet, and that is the proof that the White Police Guards which is the Duke left Gosan never disbanded, and rather, it still exists to this day.

In 15. A.E. (2), a month later, he brings Director of Pax Industries while Gosan is exercises with a sandbag over his glove.

In Kuan's Fridge (100) - Ch.631, Lot holds to Orange hair's beheaded head and says to the old man that it looked like their junior Duke lacks some manners, and this is just to make his point. He teleports and says that, the Duke isn't lacks manners, and he judging from his looks and the attitude, he must be that "Lot" who uses Combination skills. Lot says to him that he doesn't know him, background guy number three, and he doesn't call "Lot" him because he's his senior, and he should go get his master. He says for his fallen brethren whose head Lot just beheaded, he'll finish him where he stand.

Lot angry and says to him that he can't finish him. Federick calls to Lot and shouts that, does he even know what's going on right now. Lot says to Daniel that he should zip it and as for him, he'll swallow his filthy mouth in one bite. He says it's gross. Lot answers to Federick that he's at harem where their spoiled little Duke Gosan is, and apparently, he's gonna teach a lesson to his dogs that betrayed their master, and their little self-righteous Duke here who just kept the leash on and never bothered to give two shits about his guard dogs is going to get rid of his old dogs with his new ones, when all they did was getting fed up with his negligence. Lot throws beheaded Orange hair's head to him and asks that, he would be pissed off or now. At this time, Lot bites his face part and spits it. The old man angry and shouts that Lot is crazy. Lot says he's not the one who's crazy, and Gosan is, and he needs to have a word with him. His face part is recovering, and he says his master is busy.

Lot cuts his neck, but immediately after the attack, his neck is attached so virtually no effect. He rams Lot into a wall.

The White Police Guards and Gosan arrive to him. Gosan asks that what Lot is doing here, and what happened to those guards he sent, and he sees Orange hair's severed head. Gosan says Lot is annoying little prick, and he's always noisy and disrespectful, so he never liked him. Lot shouts that after everything they've done for Gosan, and this is how he treat them, and he can't throw them away like a piece of trash, and they didn't betray him, and he abandoned them, and if the Duke was still alive, he would've slapped him on his face or a paper bag whatever. A White Police Guards member says to Lot that he's crazy son of a bitch. Gosan orders to the White Police Guards member that he should wait. Gosan says it's a mess everywhere, and he let some dogs loose and they stab his back. Gosan takes out the Causality Calculator and says the courier ships just randomly start a fight with the El's. Gosan breaks the Causality Calculator like Duke. Gosan says screw it, whatever happens, happens, and he orders to White Police Guards that they should let Lot go. Gosan says listen to him and listen well, El's new guard, he should go back to El right now and tell him that the El's get ready for war. The Director of Pax Industries sees this situation through hologram. 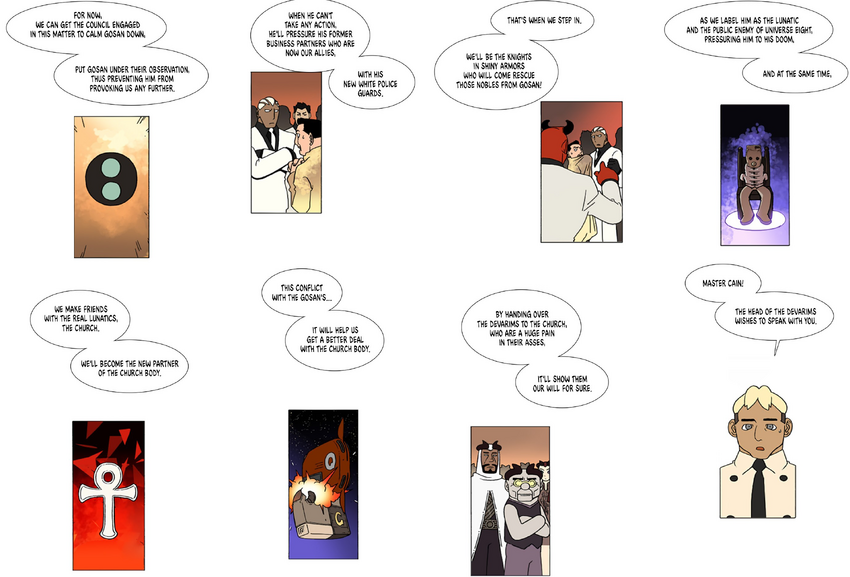 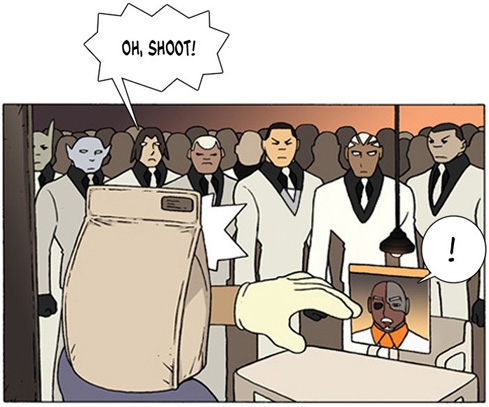 At this time, the bodyguards are gathered and the Director of Pax Industries is on the screen. Gosan asks why did the Director of Pax Industries summon his White Police Guards. The Director of Pax Industries answers it's for Gosan's own safety and there's been a riot at Silverquick's station 7 and Quanxs are escaping. When Gosan taps on a calculator, he says this is no time for that and this could be a real threat to him because the leader group of rebels called the Apple made an encrypted document and he found his name on it, and it looks like they're trying to use him to protect them after they escape. Gosan laugh and says now everyone's trying to, so those filthy Quanxs are trying to make a deal with him, so let them. Then Dike and Ringed Baldhead come to Gosan. Dike asks he's the Duke of Gosan, and he introduces himself as the Invincible Death from Urano. Gosan says Dike is doesn't look like the Invincible Death though, and he doesn't know how skillful Dike is but the intruder is exaggerating himself because his 100 White Police Guards that are standing in front of him right now, and they're all Hyper-Quanxs. Dike says he just killed one of Hyper-Quanx on the way. 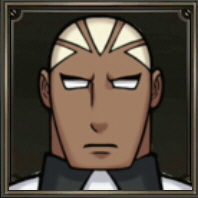 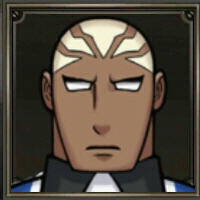 He's a member of the security guard which is belong the Gosan family.

In Denma with NAVER WEBTOON, Daniel is playable character.

Retrieved from "https://denma.fandom.com/wiki/Daniel?oldid=14570"
Community content is available under CC-BY-SA unless otherwise noted.