They're above the Internal Affairs and the Security Department, and gives to organizations the Transcriptome defense. U.C.S. checks the See every time a Transcriptome unit is on the move. 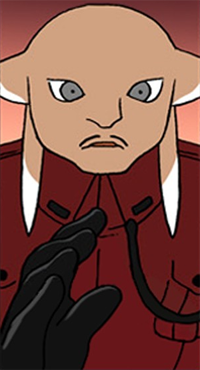 They wear a red suit.

Since Hades was arrested Edit

In (45), Bishop Kanu saw 2 Internal Affairs agents dead, and she says to Gatsu that this is a high quality picture so now she want him to finish up the details so the art won't lose its value, and now they can make the dissolution of the Security Department as the main issue on the agenda of here. The news spread throughout the whole Holy See. Here's in an uproar right now. There was a collision between the Security Department and the Internal Affairs Department because of an escaped prisoner and they said they'll be investigating the case on their own. It was the result of an overheated competition to take a better position in the See and that went over the line.

Their agent asks this projected memory is obvious what happened there, and what is Max's reason behind proposing that the evidence submitted by the Internal Affairs Department is one-sided. Max says if their agent watch it over again, there's something awkward about it and it's like the Internal Affairs Department have some sort of intentions that they kidnapped Yellow hair to draw the picture that they wanted by utilizing a part of his projected memory. Max demands a clearly projected image that isn't manipulated to cast away any doubts about this case, and the Security Department would like the Internal Affairs Department, who has been rejecting their proposal, to reveal the projected images of the memory of the two witnesses at the crime scene. Their agent says it seems like a reasonable request that the Security Department can make and he orders Gatsu and Balack who're in the projected image here to project and submit their memories. White hair says to Balack that they want to project his memory, he says he'll do that but under one condition. Gatsu thinks Balack said he'll agree to project his memory if it's in front of a crowd.

Kanu says when there's done investigating all archbishops will be called in regardless of its result, then she thinks this collision between the Security and Internal Affairs actually helped with the situation so they'll use this opportunity to start a war between the principalists and reformists, and it looks like that they'll get the result that they want because Gatsu's sketch was the decisive factor. Balack's memories are projected without any censoring in reverse order by a projector of here. The projector suddenly gives up, tells something to Gatsu. The projector says Balack has memories which are Gatsu was killed members of the Internal Affairs members. Balack is wonders that a dispatched projector from here's behind all this happening.

Black hair asks to Balack that the memory projection was stopped so something happened to the investigator from here. Balack says Black hair doesn't interrogate to him, and if he want to know the answer go ask himself. Max makes no sense, when he heard the answer from the investigator from here that they can't reveal the result of memory projection because groups in the See might abuse it. The Chief of Security Department says he doesn't feel good about this and he feels like it was all a set up now and it feels as if things are happening according to the words of the Heads from the See. The Chief of Security Department guesses the dissolution of the Security Department that the reformists are insisting, even if the principalist archbishops speak up in the meeting they'll either try to merge the 2 departments or make the Security Department a part of them. Black hair thinks it's weird because Balack even tried to show his memory projection to his friends but his brutality would have been exposed, so it's more like he was trying to pressure of control someone from the Internal Affairs. Black hair thinks it's Balack that he has to focus and there's something awkward about the investigator of here too. Black hair asks his senior, White hair to project Balack's memory in secret.

The Internal Affairs tells the prisoners that were in special cells escaped. An Internal Affairs member reports to Gatsu. Gatsu orders that they report to here immediately and focus on system recovery for now. Gatsu asks here that they send Transcriptome unit. Here says that's something that needs to be approved by the Archbishop and the U.C.S., and when Hades terrorized the Palace was a special case because it was the Palace, and the U.C.S. checks the See every time a Transcriptome unit is on the move, and Hades won't escape just to attack there again and they've got new Transcriptome units set up at there, so even if that happens there's nothing to worry about. Gatsu accepts it, and asks at least here leave a record that the Internal Affairs requested it before the Security Department. Here says remember that the Internal Affairs is the pride of the See's law and order. After the phone call, Gatsu thinks it's fortunately because it's got rejected, and the record at the Command will show the Bishop how desperate they're.

Gatsu is out of the surveillance to deliberately connect to the outside channel, and requests to the projector that he would connect to here's human resources network and tell him if there're any other agents from the Security Management Department in the Internal Affairs Department. Gatsu thinks Bishop Kanu is the Director of the Security Management Department so she's definitely going to tell her agents to do something.

Kanu reports to the Head Bishop that, she had requested to them to approve of the disabling of the defense barrier. The Head Bishop tells since Hades was used without his intention to do so, he'll has to take back what he said about not capturing him alive, and he just hope that he'll do some serious damage to the Palace.

Retrieved from "https://denma.fandom.com/wiki/Command_Center?oldid=14552"
Community content is available under CC-BY-SA unless otherwise noted.