Jiro uses his ability to beat Mustache, wakes him up, and grabs him by the collar. The survivor hides on the surface of the box with his ability. Jiro bleeds on his face, and calls Mustache. Denma runs away and shouts to Adam that, it should stay away from him. Denma falls over. Mustache teleports to here. Denma cries and shouts to Adam that he can't die like this. Adam cuts Denma's right ankle.

Marvin lies to Hazz that Aaron only just said thanks and nothing more. Hazz asks to Marvin that didn't Aaron does request or proposal of any kind to Master Cain and he asks that is it right when he just said thank him and that was it. Marvin answers that Aaron said he couldn't thank Master Cain earlier. Hazz asks that did Master Cain tell Marvin to keep him in the dark. Marvin bends his waist forward to Hazz and says that he can get Mori in here and check his memories if he'd like, here go ahead. Hazz hit to middle of Marvin's head. Marvin says this might not be the best time to bring this up, the dispatch of the auditing team for this second half is being delayed, so when will the managers go there. Hazz asks that where will Marvin be dispatches to. Marvin answers that he'll go to planet Nekar. Hazz says Nekar had be in the middle of festival. 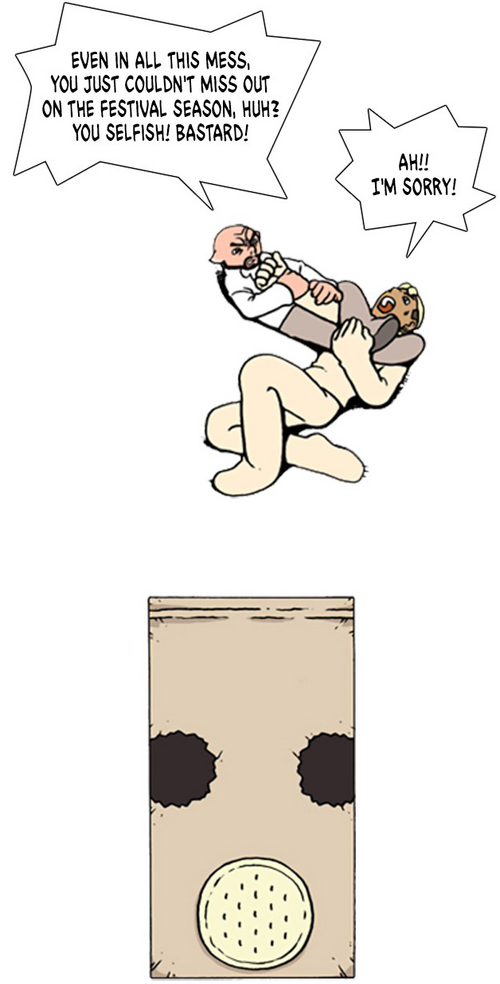 Hazz angry so he uses armbar to Marvin, and shouts that even in all this mess, he just couldn't miss out of the festival season so he's selfish bastard. Marvin says he's sorry. Gosan's bread bag appears.

Retrieved from "https://denma.fandom.com/wiki/Ch.644?oldid=13890"
Community content is available under CC-BY-SA unless otherwise noted.