A Dog of Pamana

In this episode, the planet Carlburn, Recca, Kadesh, Barnea and Terra are revealed. 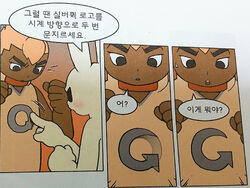 In volume 1, Denma's Silverquick mark turns gray. Probably because of the lack of yellow ink.

In (4), Hardok says, "But our life-saving efforts were soon mocked... by the Carlburn congressmen who returned with bargained booties...And booties." But original version (include old English version) writes that "But as if they were laughing at us... Calburn (Carlburn) congressmen brought all spoils of war they got for a bargain which included even women..."

The interpretation is exist. link 1, link 2

This is the old English version's lines

Wegun: Greg! What's wrong with you? Our job is to support congressmen. Just focus on it!

Greg: Shut up, Wegun! This is absurd! What's the purpose of the delegation?

Hardok: 'We went to rescue people. At the war between non-8th space council planets. And Gardeth won a huge victory over Vaneah, the brutal massacre and pillage even came on the agenda of the space council. However, even the council couldn't solve the problem and reached an agreement that Gardeth clears off their debt to other planets by the people of Vaneah. But not many planets welcomed that agreement since it's not a great benefit for them. Some people of the delegation only had fun at parties for Gardeth to celebrate its victory. The congressmen of Calburn were the same. What they did was enjoying parties rather than working. The reality of Vaneah people who are pows was more awful than I heard. Regardless of age or gender, they will end up dying from hard work and violence.'

Greg: Let's go together. You must take care of your sister.

Hardok: 'We chose children since they're lighter than grown-ups. To save more children, we did our best to minimize the weight of the vessel. But as if they were laughing at us... Calburn congressmen brought all spoils of war they got for a bargain which included even women...'

Gore: Are you out of your mind? How dare you...

Hardok: 'After they filled the vessel with their avarice, there wasn't much room for children...

Hardok: 'I had to leave them embracing them in my heart.'

Greg: What are you talking about? Save the children first!!

Wegun: Then, we are held responsible for this, when we return to Calburn. We must save them first!

Greg: Did you forget the priority order? We stick to the rules! Children first!

Hardok: 'And that moment... Greg! What's wrong with you? The passenger module where the congressmen were in, exploded.'

Greg: Accelerate! Switch the engine to the acceleration mode and enter the warp hole!

Hardok: I don't remember any combination. It's just the past. What's the use of talking about the old days...

Octopus: Then, what are that stories you've talked about?

Octopus: Hey, you! I see that you have a pitiful story! But if my client blames us for what you didn't say on purpose, it will affect on my contract extension! You'd say it's none of your business, but! If that happens, I won't tolerate it! I'll go find your family or friends to avenge...

Octopus: Sir, my client wants to talk to you.

Hix: I'm sorry to contact you all of a sudden. I didn't know your situation was so bad.

Hix: Recently, paster Duwon, who took care of us at the refugee camp, passed away. His last words were that we should thank to you. So, we moved heaven and earth to find you... I heard that after the accident, you had to leave your family because of us... I appreciate for what you did for us. And I'm sorry about what happened to you. Thanks to your help, we managed to settle down in Calburn. As a member of this society, we live life to the fullest.

Hix: Since we heard about what happened to you, we made a plan to save you. Fortunately, we had a week to prepare before your execution. Since Calburn's administrative process is an integrated system. The Bureau of Personnel arranges manpower on a case by case basis.

Hix: I'm working at administration division of the Bureau of Personnel. I'll arrange my friends who were on the turtle ship to carry out your execution. Eric, the smartest among us, is currently working at the Police Bureau, processing drugs. He'll inject you with some drugs, which makes you look dead for a half-day. Usually, after the execution, undertakers extract internal organs from the corpse.

Gaus: Now, our fathers will rest in peace.

Hix: Little Tommy is famous for being quick at his job among undertakers. Until you get to a safe place, Judelaw will take care of you. He's trying to obtain his goal which is a space delivery man. Cajun is a hair stylist. He wants to boast his capacity by giving you a new look. Miru works at district office and wins the smile of the year every year. If you have any preferred name, just let me know. Nail, the self-called the best bride material, works at central bank. Soon, she'll get married to Jewoo at the tax office. This soon-to-be married couple will create your credit information. Jiwon at NHS and Uz, the hacker, will also help them.

Hix: You'd better stop at Terra rather than going to Recca directly. It'll be better for your records at immigration.

Hardok: W..Wait! If you can really do that, can you do me a favor?

Hix: Sure. What is it? If anythings we can help you...

Bar staff: Sir, that's too much. Your wife will be angry.

Wegun: It's alright. I told her I'm working late today. And I need to get drunk. 'Cause... I feel so dreadful. I removed a long-time scourge today, but... I don't know why I feel like crap. Greg... That jerk!

Ghost: The jerk. Don't be surprised. I'm just a ghost.

Wegun: I must not be drunk yet. The night is long. I lost everything as you broke your word for destroying the black box of the turtle ship.

Ghost: So, I had to get divorced and leave Calburn to protect my family.

Wegun: It's all your faults! You forgot your job and played a role of hero. If I didn't disclose data, all of our co-workers would have got fired. They had their families, too. Darn! What, am I talking to myself now? Huh! Give me another shot!

Ghost: I dropped by to say "Thank you" before I leave to otherworld. When I saw May and Myrael... They looked so happy. I could see that they are really happy now. Thanks for taking care of them.

Wegun: Shut up and go away! You jerk!

Bar staff: Yes, the man, self-called a ghost, paid for your drinks.

Pirate: Sob... We were on the way to save you. How can it happen on your birthday...

Sir: Everyone! He will survive in our memory forever! I know you're so sad, but we must pull ourselves together! With your new captain who is in front of you! As the new captain, I follow...

Hardok: Sorry, everybody. I was away for a few days. I have something to tell you...

Hix: And... Do you remember the baby on that vessel? That baby... She has become a singer, and we are all so proud of her. She insists that she must do something for you, since the day back to Recca is your birthday...

Sir: What? Wanna join me?

Hix, Hardok: Thank you. That's all I can say.

Captain: We're supposed to go there tomorrow! Why is everyone so fussing about it?

CEO: ...... Did you go to the orphanage again? Gee, why do you spend all of your money on them? They're blessed for having such a sponsor like you...

Edom: You got it wrong, sir. It's not me who takes care of them. It's them who protects me.

CEO: I don't get it... Anyway, you're taking a day-off tomorrow? 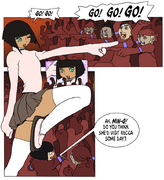 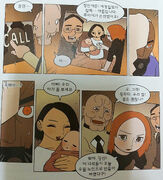 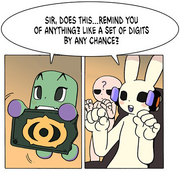 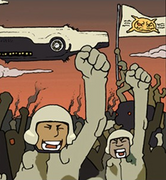 A.E., volume 1
Add a photo to this gallery
Retrieved from "https://denma.fandom.com/wiki/Captain_Hardok?oldid=15037"
Community content is available under CC-BY-SA unless otherwise noted.