Arcel (아셀, Asel) is a character in Denma.

His real identity is Edel (에델, Edel). Edel is pronounced 'edel' as we known it. Edel, who's priest of pseudo-religious organization dispatched at Silverquick is pronounced 'idel'.

In 5. A.E., he goes to the toilet alone while he's taking classes with Edrei. By the way, Ballack comes and tries to rape him. At this time, his feelings explode and Ballack stops for a moment because of the flash of his forehead. He takes the lid of the toilet water tank and beats Ballack and flees. Yahwah refers to the Crying Daddy's closest friends who got a better experimental material called Arcel. At this time, it's revealed that the entity of Arcel is a young woman named Edel, the Ephraimite. Yahwah commands Ballack to harass Arcel.

In 11. A.E. link, Ballack is harass Arcel again this time, broken his leg to Golden hair, a trainee Quanx deliverer who has just smoke a cigarette.

In Savoy Gaal, he keeps on pursuing Golden hair with a crush on him. But it's rejected. At this time, the priest comes to him and introduces himself as Edel, management staff of Silverquick, and says that there is a place to go with him by recommendation of Dr. Yahwah.

In (5) and Pigear (8), he and Edel arrives at the Carlburn where Denma is. He reveals to Denma that he's Ephraimite Quanx. Denma calls Jet when he's running. In Pigear (9), Denma says to Jet that he found a friend who can hang out with him. Jet keeps running and hangs up. In the spaceship, Jet sees the sign language in the recording video that he spoke with Denma and notices that Denma has found Ephraimite Quanx.

He's participate in the Savoy punitive action, he plays stopped all the systems in the building where the Savoys are located. Then Edel says to him that it's dangerous, and planar constrainted him and keep it folded.

Edel rescues Edrei and catches Gaal. At night, Edel takes out a meal table with food in his pocket and makes a party to Edrei's safe return. All the rest except Arcel sing together while drunk together. Because Arcel wants to go home. Edel pulls out the caught Gaal by mistake and takes it off to the side. Adam who's playing together touched it and then he's hit by the booster gun that Gaal shot. Except for Edrei, they're witnesses Gaal when he defeating Adam. Edel catches the decompressed Gaal when he takes his ability again. 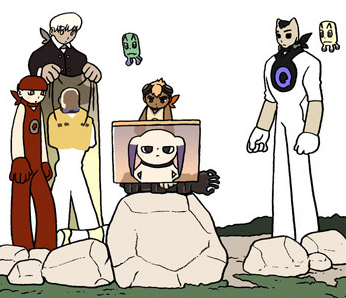 Edel takes Arcel and finds Mirai Datsu, and Denma goes with Cell and Quai to find Gaal's sister. Denma thinks that it's difficult to find Aaron's apprentices as a personal information address, so he has to find another place to meet her. Denma gives Cell's Avatar the slip. Edel and Arcel go to the address where Mirai is located before Denma. Edel finds out that Mirai Datsu is a hologram, and reports to Yahwah that she does not meet with the customer directly to protect her.

Cell tells Edel to Denma's moving line. he says Mirai Datsu will be in a nearby farmer's market where there are still a lot of cash businesses. Vendors are sold tofu and kimchi to Edel and Arcel and teach them the location of Mirai. Mirai is meet with Edel and Arcel, and after a short time, she's quietly dragged to them.

While eating tofu and kimchi, Denma recommends him to drinking. After being drunk, he talks himself as hot bombshells. And mentions Mirai Datsu, who was brought yesterday. Edel is surprises and catches him to planar constraint. Denma recognized that Mirai was caught by them. Denma uses spy-bots and his Quanx ability to rescue Mirai. At this time, he sees Arcel sleeping. Arcel sleeps with his eyes open. Arcel has breakfast. And he waits for Gaal with Denma and Edel.

In Sixteen (1), he finishes his mission with Edel and returns to Silverquick's station 7. After that, Edel calls him to sister and stay sober if he can.

In God's Lover (1), he wakes up and feels a headache. And he keeps on pursuing Golden hair with a crush on him. He ignores Golden hair's warning. Yahwah secretly watches he and Golden hair, then he says Arcel's memory is clean.

When Ballack start an argument with his green friends for the revenge of his broken leg, Golden hair pulls Ballack and his friends' heads off with his bare hands. And Golden hair is taken by the Adams. Denma appears, and he feels a headache.

The soldiers of Carlburn Quanx Military are go to the one of the safe houses of Carlburn's Savoys, the building is built to withstand attacks from ordinary fire weapons. Sergeant Maggie sees the record of visitors who entered through the city gate. Hador says the redhead must be related to the EMP incident and the thing on the back of his head is a Neuro-scanning device used for mind-body transfers, and his actual self is probably an Ephraimite, and he has seen something similar before. Then Hador says if the rumor about a company that abducts and enslaves Quanx to do their courier deliveries is true, he suspect Silverquick backed by the Church of Madonna, so he'll need U.C.S. on his back and he'll dig more info because an EMP went off in the middle of the city, that's an act of terrorism that jeopardizes the security of Carlburn.

Adams beats the Golden hair, Eunguy. Yahwah orders Eunguy has killed Ballack, so he'll has to continue on his mission for him. Eunguy refuses this because he isn't a pedophilic psychopath. Yahwah appears directly in a muscular build and beats Eunguy. Yahwah says Eunguy is pulled everyone's head off in public, and he all are just a pile of toxic waste.

The deputy director of Internal Affairs' secretary reports that Yahwah's mind map was far off from the church's simulation, and he's imcluded Ephraimite Quanx in the missions even though the Academy of Science were done with their study.

Jet goes to Denma and asks about Ephraimite Quanx which he finds, but Denma answers with he doesn't know. Because Denma's memory after Yael Road was deleted.

Eunguy remembers what Yahwah said. Yahwah said that Eunguy is sure he would be happy to learn that his old friend is in here. Eunguy goes to him and says he's sorry.

Jet says to Ringed Baldhead that Denma found another Ephraimite Quanx, except he doesn't remember a thing due to his concussion. Then Jet says if the recent blackouts were caused by Quanx, their ability which is the same as that of Crying Daddy, will help them complete their plan. Ringed Baldhead says he'll tell Apple members to keep their eyes on it. Then Jet enters his room, but there's Yahwah with a muscular body that sprays HANK on the window, and he's surprises to see his Pentagon codename on the window. Yahwah asks how Jet did Quanx end up as enemies from being friends, and they'll kill each other if he ever identify himself. At this time, a blackout occurs. Jet doubts whether the person in here is Eldgon or Randolph. Then, when the electricity came back, Yahwah laughs that Randolph has doing well, and Jet is surprises. Perhaps Eunguy had harassed Arcel.

In 16. A.E. (1-1), Adams beats Eunguy. Yahwah says Randolph has been doing fine, but now he refuses. Eunguy says he doesn't want to does that to a kid anymore. Yahwah says Randolph can't always to what he want, so if he doesn't want to, he'll blow his head off right now. Ringed Baldhead says to Jet that he called him back in because he got a report right before departure when he told the Apple members to find Ephraimite Quanx, it said that there was a witness by chance and their schedule is confirmed, and says now he's really leaving. Jet recalls Yahwah's word. Yahwah said, when he reveal it depends on how obedient Jet is to him, like Randolph did. Jet thinks he has to capture Randolph before anyone else does, and he's tight up with Ephraimite. Eventually, Eunguy approaches him. He cries and says, Eunguy isn't someone who tortures kids, but he's doing this to him, so he'll get away from him because it hurts. Ivory hair watches this.

He uses his ability. When Jet is washing his hand in the toilet, he sees the temporarily blackout and he's curious. Eunguy says he's sorry. This scene is recorded. Ivory hair says to Jet that the Ringed Baldhead told him to tell him this first that he thinks he has found the Ephraimite Quanx and he heard someone screaming so he went ahead to see what was going on and he confirmed it from the video. Ivory hair shows the video. In the video, Eunguy pinching him everywhere. Jet wonders this guy is really Randolph and asks is pinching the only thing he's doing. Ivory hair answers this guy's strength is inhuman so this couldn't get any more brutal.

In Kuan's Fridge (2), Jet thinks now that an Ephraimite Quanx is found, he doesn't have a second to waste, and he need to recruit Randolph right away, and he forgot he had to ask him something else about his foggy memories. Jet sees him, and he thinks he looks so tense. Jet tries to talk, but he runs away. Jet thinks he'll let Guido or Denma deal with this.

In 15. A.E. (3-2), Gosan sees himself coming to the emergency call and wears a bread bag on his head, and says if it's not an emergency, he'll do something. At this time, the bodyguards are gathered and the Director of Pax Industries is on the screen. Gosan asks why did the Director of Pax Industries summon his White Police Guards. The Director of Pax Industries answers it's for his own safety and there's been a riot at Silverquick's station 7 and Quanxs are escaping. When Gosan taps on a calculator, the Director of Pax Industries says this is no time for that and this could be a real threat to him because the leader group of rebels called the Apple made an encrypted document and he found his name on it, and it looks like they're trying to use him to protect them after they escape. Gosan laugh and says now everyone's trying to, so those filthy Quanxs are trying to make a deal with him, so let them. Then Dike and Guido come to Gosan. Dike asks he's the Duke of Gosan, and he introduces himself as the Invincible Death from Urano. Gosan says Dike doesn't look like the Invincible Death though, and he doesn't know how skillful he's but the intruder is exaggerating himself because his 100 White Police Guards that are standing in front of him right now, and they're all Hyper-Quanxs. Dike says he just killed one of Hyper-Quanx on the way.

The fifth son of Hyponne family calls and says to Soobin that a strike from courier service employees turned into a violent protest and he doesn't know exactly what's going on though, all he knows is that it also stopped the logistics business at other Silverquick's stations, and it's also affecting their schedules indirectly.

Retrieved from "https://denma.fandom.com/wiki/Arcel?oldid=14335"
Community content is available under CC-BY-SA unless otherwise noted.